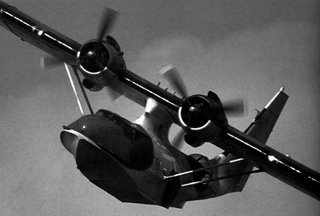 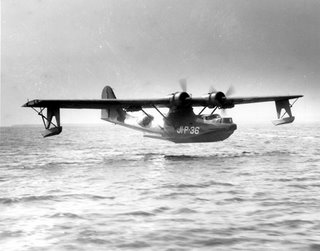 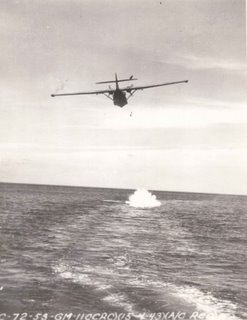 Variations of this patrol bomber flying boat served in various militaries around the world for a long time after its introduction in 1936 and the declaration of its being "obsolete" a couple of years thereafter, as set out here. But the slow and droning PBY was the "Energizer Bunny" of its day and just kept flying and flying.... right into history as one of the great airplanes - that was a boat, too.

A total of approximately 4000 Catalinas were built between 1936 and 1945. Because of their worldwide popularity, there was scarcely a maritime battle in WW II in which they were not involved. The PBY had its vulnerabilities: it was slow, with a maximum speed of 179 mph, and with no crew armor or self-sealing tanks, it was highly vulnerable to anti-aircraft attack. However it was these weaknesses, coincident with the development of effective radar, and Japanese reliance on night transport, which led to the development of the "Black Cat Squadrons." These crews performed nighttime search and attack missions in their black-painted PBYs. The tactics were spectacularly successful and seriously disrupted the flow of supplies and personnel to Japanese island bases. The Catalinas also proved effective in search and rescue missions, code-named "Dumbo." Small detachments (normally of three PBYs) routinely orbited on stand-by near targeted combat areas. One detachment based in the Solomon islands rescued 161 airmen between January 1 and August 15, 1943, and successes increased steadily as equipment and tactics improved. After WW II, the PBY continued its search and rescue service in many Central and South American countries, as well as in Denmark, until the 1970's.

It was not a small airplane:

Overall, it was a remarkable aircraft, compartmented like a flying submarine and usually carrying a crew of 10 to 12. There were three pilots (a patrol plane commander and the two co-pilots who alternated flying and navigating), a plane captain (head mechanic) who rode in the "tower," two radiomen, two ordnance men, plus several machinist’s mates. It had several bunks, a small galley, a sit-down toilet, two 50-caliber machine guns in the waist blisters and twin pop-gun 30-caliber machine guns in the nose. It carried 1,450 gallons of aviation gas in the cumbersome wing and 3000 pounds of bombs hanging under the wing, plus assorted anti-personnel bombs inside (usually laid on the bunks).

The wingspan of the Catalina was 104 feet, and she was not built for speed. She was built for endurance, powered by two magnificent Pratt & Whitney engines that – like the crews – rarely gave up.

One Catalina pilot, Lt Gordon, won the Medal of Honor for rescuing a downed bomber crew under rather severe condition. His story is here and his citation reads:

. For extraordinary heroism above and beyond the call of duty as commander of a Catalina patrol plane in rescuing personnel of the U.S. Army 5th Air Force shot down in combat over Kavieng Harbor in the Bismarck Sea, 15 February 1944. On air alert in the vicinity of Vitu Islands, Lt. (then Lt. j.g.) Gordon unhesitatingly responded to a report of the crash and flew boldly into the harbor, defying close-range fire from enemy shore guns to make 3 separate landings in full view of the Japanese and pick up 9 men, several of them injured. With his cumbersome flying boat dangerously overloaded, he made a brilliant takeoff despite heavy swells and almost total absence of wind and set a course for base, only to receive the report of another group stranded in a rubber life raft 600 yards from the enemy shore. Promptly turning back, he again risked his life to set his plane down under direct fire of the heaviest defenses of Kavieng and take aboard 6 more survivors, coolly making his fourth dexterous takeoff with 15 rescued officers and men. By his exceptional daring, personal valor, and incomparable airmanship under most perilous conditions, Lt. Gordon prevented certain death or capture of our airmen by the Japanese.

According to this the last Catalina in U.S. military service retired in 1967.

Along the way, Catalinas sank almost 40 U-boats while acting as anti-submarine escorts, located the German battleship Bismarck for the British fleet to move infor the kill and found the Japanese fleet before the Battle of Midway. Some Catalinas had MAD gear.

Modified as WWII progressed, the Catalina was equipped with radar, painted black and flew at night to find the enemy - and the legend of the "Black Cat" squadrons began. As set out here,

It was necessity which obliged the Japanese to supply their positions and outposts ashore almost exclusively at night. Their ships and barges moved mostly in small convoys guarded by one or more combatant vessels. These operations were carried on throughout the area and it was virtually impossible for U.S. surface combatant forces to stop them.

Ironically, it was also necessity which had turned the PBYs into night creatures. Their slow speeds, which rendered them clumsy and vulnerable by day, made them agile and surefooted by night. Radio altimeters allowed them to skim the dark surface of the ocean where fast fighters feared to tread. Their size, which made them easy daylight targets, enabled them to carry large quantities of fuel and weapons, and to range deep into enemy-controlled areas after dark. They could remain aloft all night, searching out their prey with electronic eyes or lying in wait at strategic points. The Black Cat concept developed naturally through the survival instinct and the determination to strike back against a cruel and unrelenting enemy. No one man or group can be given credit for its genesis. It was the result of the contributions and sacrifices of many, a combination of courage, technology, and the hard lessons of combat.

The Americans were not the sole operators of "Black Cat" Squadrons. The Royal Australian Air Force also used the Catalina for these missions and lost 239 airmen in their use, see here and here:

In RAAF service, the aircraft was best known for its exploits as a night intruder. Painted matt black and carrying sophisticated mission equipment, the "Black Cats" undertook mine laying and air/sea rescues under the cover of darkness and assisted with the repatriation of prisoners-of-war from Singapore and Japan at the end of the war.

Once again the "Cat" was involved in great events, as they shadowed the Japanese fleet before the Battle of the Coral Sea.

Some of these aircraft are still flying today, and there are several groups devoted to preserving the legacy of the Cats. See here, here, here,and here.

It's a history worth preserving.