The VOA and pirates

The Voice of America does a simple show on pirates: Pirates May Be Popular in Books and Movies, But Piracy Remains a Threat which is, for the most part acceptable.

Pirates attacked a French oil tanker off Yemen in 2004

Virtually everyone recognizes the attack on the Limburgh was a terrorist act. See here:

Al Jazeera TV quoted a written statement supposedly emanating from Osama bin Ladin, in which the Al Qai’da leader expresses his pride in the latest attack, as well as the killing of a U.S. Marine in Kuwait.

“We congratulate the Muslim Nation for the daring and heroic Jihad operations which our brave sons conducted in Yemen against the Christian oil tanker,” according to a translation of the statement published by Reuters. “By striking the oil tanker in Yemen with explosives, the attackers struck at the umbilical cord of the Christians, reminding the enemy of the bloody price they have to pay for continuing their aggression against our nation.”

The Limburg attack is the first to be aimed primarily against the western economy - "the lifeline of the crusader community" as the statement put it. 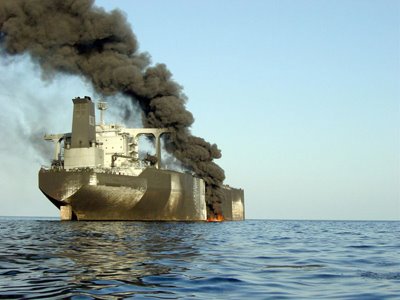