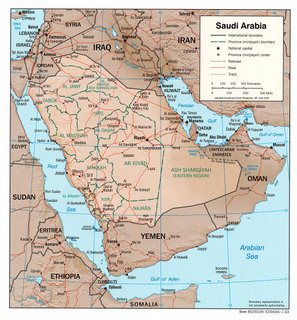 After an al Qaeda threat, special maritime scrutiny is being kept over the Saudi oil terminals, esepciall the one at Ras Tanura, as set out here:

In their sights are the kingdom's Ras Tanura terminal, the world's biggest offshore oil export facility, and Bahrain's Bapco refinery.

"Acting on information received, Coalition naval forces, operating in support of Saudi and Bahraini forces have deployed units to counter a possible maritime threat to the oil facilities at Ras Tanura," Britain's Royal Navy in Dubai said in a statement.

Saudi Arabia's own security forces and navy are guarding strategic oil facilities and coalition forces are patrolling only in international waters.