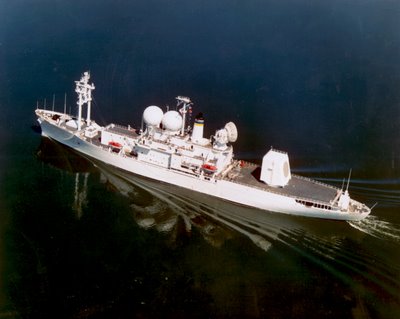 With all the excitement about the North Korean nuke and missile tests, it may be a good time to visit a ship, operated by the Navy's Military Sealift Command, that may play a role in monitoring what the DPRK is up to. The ship is a Missile Range Instrumentation Ship- T-AGM. In this case, USNS Observation Island (T-AGM-23, whose mission is described as:

The Cobra Judy radar is a ship-based radar program based on the US Naval Ship Observation Island [T-AGM-23].

COBRA JUDY operates from Pearl Harbor and is designed to detect, track and collect intelligence data on US. Russian, and other strategic ballistic missile tests over the Pacific Ocean

The AN/SPQ-11 shipborne phased array radar is designed to detect and track ICBM's launched by Russia in their west-to-east missile range. The Cobra Judy operates in the 2900-3100 MHz band. The octagonal S-band array, composed of 12 288 antenna elements, forms a large octagonal structure approximately 7 m in diameter. and is integrated into a mechanically rotated steel turret. The entire system weighs about 250 tonnes, stands over forty feet high.

In 1985, Raytheon installed an 9-GHz X-band radar, using a parabolic dish antenna to complement the S-band phased array system. The five story X-band dish antenna is installed aft of the ship's funnel and forward of the phased array. The X-band upgrade [which may be associated with the COBRA SHOE program name] was intended to improve the system's ability to collect intelligence data on the terminal phase of ballistic missile tests, since operation in X-band offers a better degree of resolution and target separation.

The S-Band and X-Band radars are used to verify treaty compliance and provide support to missile development tests by the Ballistic Missile Defense Organization. The radars are also being used for research and development work in areas not accessible to ground-based sensors.

Before it became T-AGM-23, Observation Island had other identities:

Empire State Mariner, Capt. V. R. Arkin, Master, made three voyages for MSTS. The first two took her to Bremerhaven and Liverpool. The third, commencing in May 1954, took her along both the east and west coasts, as well as to the Canal Zone, Guam, Korea, and Japan. She returned to Mobile, Ala. in September 1954, and entered the National Defense Reserve Fleet 9 November.

Empire State Mariner transferred to the Navy 10 September 1956 with three other Mariners. Her conversion to the first naval ship having a fully integrated Fleet Ballistic Missile System was authorized 15 October 1957, and partial completion of the project was accomplished at Norfolk Naval Shipyard, Portsmouth, Va. before she commissioned 5 December 1958 as Observation Island (EAG-154), Captain Leslie M. Slack, USN, in command.

During the conversion there were no major hull or engineering changes made other than installation of a roll stabilization system. However, extensive alterations were accomplished in the superstructure and hold areas so as to accomodate the FBM Weapons System. Observation Island departed her homeport of Norfolk 3 January 1959, underwent shakedown at Guantanamo Bay, and then operated on the Atlantic Missile Range off Cape Kennedy, conducting dummy missile launches and communications tests.

In March 1959 Observation Island returned to Norfolk Naval Shipyard for installation of additional equipment, including the Ships Inertial Navigation System (SINS). In June she steamed for her new homeport, Port Canaveral, Fla., and made preparations for the first at-sea launch of a Polaris missile. Designated UGM-27, the missile was successfully launched from Observation Island 27 August.

[The photo from here purports to show that first launch.]

Following this milestone, Observation Island returned to Norfolk Naval Shipyard for installation of a fire control system to enable her to launch more sophisticated guided versions of new generation Polaris missiles. She also received a new launcher, the developmental prototype of those installed in the FBM submarines.

This work was completed in January 1960 and Observation Island returned to Port Canaveral to continue Polaris test launch operations. After a total of six launchings, the ship commenced support of Polaris launchings from FBM submarines. She provided optical and electronic data gathering services, and acted as communications relay station between submerged submarines and the supervisor of range operations at the Cape. The first successful fully guided Polaris missile launching from a submerged submarine took place 20 July 1960 from George Washington (SSBN-598). Through October Observation Island also supported launches from Patrick Henry (SSBN-599).

It seems that Observation Island may be owned and operated for the Navy by Maersk as set out here.

Observation Island is scheduled to be replaced:

The Cobra Judy Replacement program will replace the current U.S. Naval Ship (USNS) Observation Island which has become unsustainable and due to leave service no later that 2012. This program will fund the development of a single ship-based radar suite for world wide technical data collection against ballistic missiles in flight. Prior funding provided instrumentation of quality radar data and imaging, detailing threat assessment of ballistic missile development, testing and range augmentation and monitored or verified specific aspects of United States treaties with other countries. To avoid vulnerabilities in our national security it is imperative that the Navy replace the current capability of Cobra Judy in a timely manner to prevent any potential gap in coverage. Prior studies have indicated that a ship-based radar replacement is the most timely and cost effective solution.

The acquisition strategy calls for leveraging ongoing Navy Ballistic Missile Defense (BMD) radar development, updating existing user interface/communications/data handling equipment designs from a similar operational unit, and purchasing and integrating the mission equipment aboard an appropriate merchant-class hull. System design will be accomplished using in-hand technologies and commercial standards to lower schedule risk and produce a product with the lowest possible life-cycle cost.
***
A 2002 MIT reported investigated the feasibility of converting an existing ship to a Mobile Test Range Asset in order to field a platform carrying the Cobra Judy II (CJ2) system on a much newer ship. Based on a review of available hull forms and prior research, the Henry J. Kaiser class oiler (T-AO 187) was found to be the most suitable conversion candidate.

A contract has been let to Halter Marine to build the new ship. A possible look for the new T-AGM is seen in the nearby drawing. 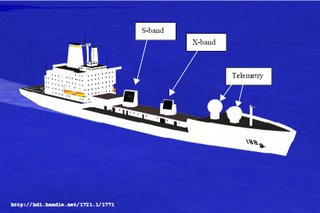 Whenever she is replaced, Observation Island has been a valuable asset to the United States for over 50 years and her crews deserve recognition for a job well done.
Posted by Mark Tempest at 10/15/2006 07:33:00 PM