As set out in a previous post, at the start of America's involvement in WWII, the U.S. got off to a slow start in protecting the merchant ships off its East Coast from German submarines.

The British, who had been fighting the U-boats since 1939, grew concerned that the American Navy was not protecting valuable merchant ships and offered up some help in the form of coal burning antisubmarine trawlers. One of these was HMT Bedfordshire, pictured above. The purpose of these trawlers is well described here:

In 1941, Allied ships were under constant attack from German U-boats in the Atlantic Ocean.

Along the East Coast of the United States, the submarines were a serious threat , but as the US Navy had no specific anti submarine fleet. Twenty four ships from the Royal Navy were sent to assist with patrol and escort duties.

They all belonged to the Royal Naval Patrol Service, a fleet of ships that had all been converted from fishing trawlers.

This duty was rough, and more British ships were lost in the RNPS than in any other branch of the Royal Navy.

One of those lost ships was HMT Bedfordshire. She was sunk by U-558, captained by Kapitanleutnant Krech. 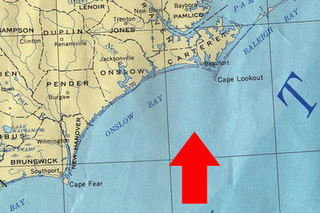 In his book Torpedo Junction: U-Boat War Off America's East Coast 1942, Homer Hickam describes the death of Bedfordshire off the North Carolina coast near Frying Pan Shoals, as she was pursuing U-558 and had survived a couple of torpedo attacks:

...When the trawler was 1,000 meters away, Krech ordered two torpedoes fired and then took his U-boat down...After several minutes...it was evident that the torpedoes had missed. Cautiously, Krech took the U-558 back up and looked around. The trawler was still there and now barely 600 meters away and turning in Krech's direction. Had he been seen? He didn't wait to find out. He made a quick calculation, lining up U-558's bow directly toward the trawler. "Los!" Krech snapped and third torpedo was on its way.

This time, Krech didn't take his U-boat down. He didn't dare. He had to see what happened to the trawler. If the torpedo missed, the British were going to be right on top of him. A man was behind Krech, quietly counting...At count number 36, there was huge explosion. The trawler had turned at the last moment and the torpedo caught her squarely amidships. The trawler, which was the Bedfordshire, was thrown up on her bow, her stern jerking upward. Krech blinked and in that instant, the Bedfordshire was gone, leaving nothing but a spreaking wake over the rippling sea.

Some interesting tales from survivor's of the Royal Naval Patrol Service here, including the saga of a sailor who missed the final sailing of HMT Bedforshire and survived here.

It took several months for the U.S. to adopt ship-saving practices including convoys and liberal use of escorts. After August 1942, U-boat attacks diminished as it became harder to make attacks. The U-boats largely withdrew, chased off by the new tactics used by the Americans, many of which they learned from the brave trawlermen.