Sea lanes in the news: China, India and the US

Oh, sea lanes and China's weakest link as set out in US, China, India flex muscle over energy-critical sea lanes:

The United States, China and India are moving to assert control over the sea lanes through which they receive critical energy supplies amid fears in Beijing of a US blockade of the Malacca Strait in the event of a crisis over Taiwan, experts said.

The United States at present has vast control over the major so-called "choke points" on the world's sea lanes, said experts at a recent forum in Washington.

Almost all of China's energy imports are obtained through sea and it is worried the United States could hold its oil supply hostage.

Beijing is also concerned over its gradually weakening position in the Indian Ocean as New Delhi develops new generations of weapons systems with US support.

While it may be difficult for the US navy to interrupt China's sea lanes, "these appear vulnerable" in the eyes of the Chinese military, said Bernard Cole of the US National War College.

China has been exploring some options including the Mekong River through Laos, Myanmar and Vietnam as set out here. That helps with Malacca Strait but isn't much for the Indian Ocean or the Strait of Hormuz. Much more on sea lanes here: 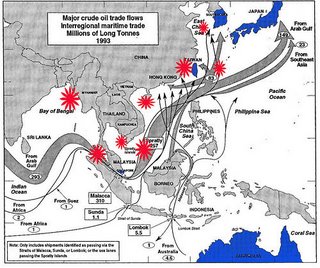 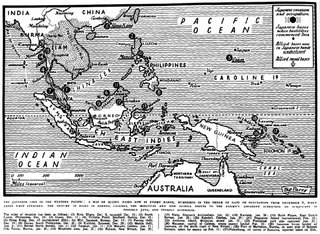 UPDATE: Forgot to add a link to China Builds up Strategic Sea Lanes.

UPDATE2: China "cooperating" in Cambodia as set out here

Cambodia is strategically vital to China because it overlooks crucial sea lanes and could conceivably share a maritime border if China's military eventually enforces Beijing's claims to disputed, energy-rich atolls in the South China Sea. Beijing currently gives more civil aid to Cambodia, more than $2 billion since the 1970s, than any other country, according to Sophie Richardson...