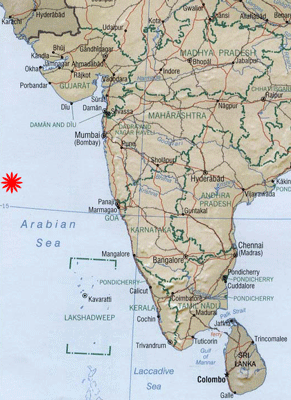 According to reports made to the ICC Commercial Crime Services as set out here, things are relatively calm on the piracy front. The report includes reports 3 attempted boardings by robbers of ships at anchor in ports in Indonesia, Brazil and India and one unsuccessful attempt to board a bulk carrier in the Arabian Sea at 15:24.82N - 066:21.62E. I have roughly plotted this postion on the map at the red burst.
Posted by Mark Tempest at 10/06/2006 09:01:00 AM