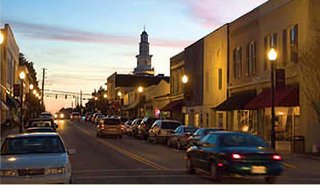 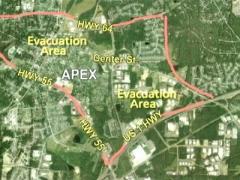 Nighttime fire at a plant storing a variety of chemicals has triggered a massive evacuation in a small suburb of Raleigh: Apex plant fire forces evacuations:

As many as 17,000 residents had been asked to evacuate by early Friday as firefighters waited for daylight to battle a hazardous materials fire that shot flames some 150 feet into the sky.

Hospital officials said 18 people were sent to emergency rooms after the blaze that began late Thursday in this suburban Raleigh town.

When he arrived at the scene, Radford said, a chlorine cloud rose 50 feet in the air and flames shot three times as high. He estimated there were 20 to 30 explosions.

The fire jumped the chemical plant site and appeared to have burned four petroleum tanks belonging to another company, said Mayor Keith Weatherly. That likely accounted for some of the explosions, he said.

Residents have seen the plume or smelled chemicals from as much as 2 miles away from Environmental Quality Co., where the fire started about 10 p.m. Thursday.

Hours after asking almost half the town's resident to evacuate, officials ordered additional evacuations for several hundred more homes when a plume of smoke and chemicals moved. Residents as far as 2 miles away could see the plume or smell the chemicals, officials said.

It's raining, which should help in surpressing the spread of the chemical smoke.

There is also lightning, which should supress the firefighters until the thunderstorm portion of what is supposed to be a severl day rain storm passes.