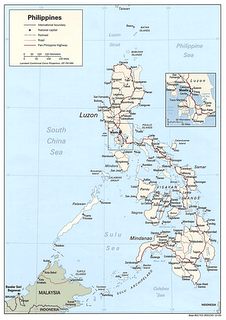 He said almost 60,000 troops, half the entire military, were now on duty in Mindanao and the Sulu archipelago.

Raising the alert level to extreme signals the government is bracing itself for more terror attacks from Muslim extremists. Metro Manila remained on moderate alert.
***
He said it was likely that the Al Qaida-linked Abu Sayyaf and Jemaah Islamiyah groups would continue attacking targets in the south.

Both groups, which are on the US government’s list of foreign terrorist organizations, have been blamed for a series of bombings on Tuesday and Wednesday that killed 12.

The threat of more attacks has forced the United States, Britain, Australia and Japan to issue new travel advisories.

Esperon said more roadblocks would be put up in the south and intelligence gathering would be intensified.

A massive manhunt for Abu Sayyaf leaders and Jemaah Islamiyah bombers Dulmatin and Umar Patek would be stepped up in Sulu, he said.

That operation alone has tied up more than 5,000 troops in dense jungle to capture an estimated 200 militants.

Security analysts have said that about 30 mostly Indonesian Jemaah Islamiyah militants, including Dulmatin and Patek, were now in the south.

Dulmatin’s wife was arrested last week and, under questioning, confirmed intelligence information that the Abu Sayyaf and Jemaah Islamiyah were plotting to hit more targets in coming days.

The Abu Sayyaf was responsible for the country’s worst terrorist attack in 2004, when its fighters bombed a passenger ferry and killed over 100 people.

It's fighters are also wanted for a series of high-profile kidnappings and murders, including those of two Americans seized in 2001.