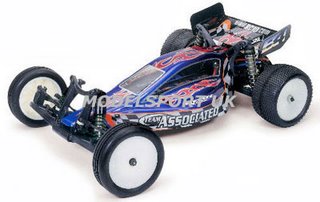 As set out in Toys from Hell:

The government fears that terrorists would, say, maneuver a radio controlled truck, loaded with five pounds of explosives, so that it ended up under a military vehicle. Then, boom. No terrorists have tried this, and maybe none have even thought of it yet, but someone in the government believed it better to be on the safe side.

Seems to me I recall the use of such dangerous "toys" from the last "Dirty Harry" movie, The Dead Pool. More here:

A modified 1/10 scale 2wd Associated RC10 off road racer with an off-the-shelf Parma International 1963 Chevrolet Corvette body was used in the famous chase scene in which "Dirty Harry" Callahan is being pursued through the streets of San Francisco, California by a highly explosive bomb disguised as an R/C car. The "bomb" was driven by world-champion race driver Jay Halsey. The car was in fact was sold with an electric motor being a competition model, which for cars in that scale was at that time only sold and permitted to enter competitions with electric motors; the internal combustion engine soundtrack were added in post-production.

The terrorists in question, the Tamil Tigers have been leaders in developing new ways to blow people up.

I wonder if The Dead Pool just made it to Sri Lanka?

UPDATE: Another use for R/C cars in Iraq.