Don't mess with the U.S. Navy 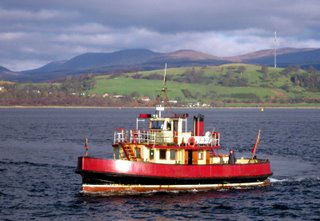 The skipper of a tiny Clyde ferry feared his boat was going to be blown out of the water by a US warship yesterday.

The Kenilworth was sailing from Kilcreggan to Gourock when the American threatened to open fire.

The US ship had just set out from the nearby Faslane Navy base when it radioed the warning.

A source said: "The ferry skipper was just toddling across to Gourock when he got a call on the radio.

"A departing US naval ship warned, 'Unidentified vessel approaching on my starboard side, please identify yourself. If you fail to do so, we will open fire on you with live ammunition.'"

The source added: "The skipper got a real fright and radioed him back, saying he was just a wee ferry.

"If you've got a big battleship loaded with guns bearing down on you and threatening to shoot, it's quite scary."

The incident happened at 9.40am on the first day of a massive international training exercise - Operation Neptune Warrior - off the west coast of Scotland.

No one was hurt. Probably a few tense moments for all concerned.

Generally, a review of ferry schedules is a good idea at pre-ex biefs. As is a warning to local ferry boat captains to stay clear of naval exercises in progress...

Photo is of MV Kenilworth. Photo notes: The ferry MV Kenilworth arriving at Gourock pierhead, having crossed the Firth of Clyde from Kilcreggan. The television mast on the Rosneath peninsula is visible in the background.
photograph taken 25 January 2006 by User:Dave souza. Any re-use to contain this licence notice and to attribute the work to User:Dave souza at Wikipedia. See here.
Posted by Mark Tempest at 10/24/2006 08:42:00 AM