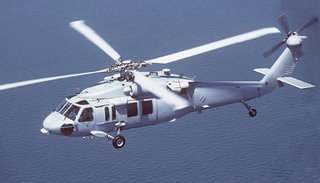 The Navy will take another step into its rotary-wing future Friday with the establishment of a new helicopter squadron.

The "Sea Knights" of Helicopter Sea Combat Squadron 22 will operate out of Norfolk Naval Station and fly the MH-60S. The MH-60S is one of two modernized H-60 platforms that will replace six other current Navy helicopter types and serve as the backbone of the future fleet, according to Atlantic and Pacific Fleet Naval Air Force officials. The transition has been in the works since 2002, when the Navy approved a new concept of operations transition plan.
***
The MH-60S will replace the CH-46D and HH-60H for vertical replenishment, anti-surface warfare, combat search and rescue and Naval Special Warfare support, according to Naval Air Systems Command.

The MH-60S will also handle a portion of the airborne mine countermeasures mission, although some of that will continue to be performed by the current MH-53E.

The MH-60R is replacing the SH-60B and SH-60F in their anti-surface and anti-submarine warfare missions; it also can perform surveillance, communication relay, search and rescue, naval gunfire support, logistics support and personnel transfer missions, according to NavAir.