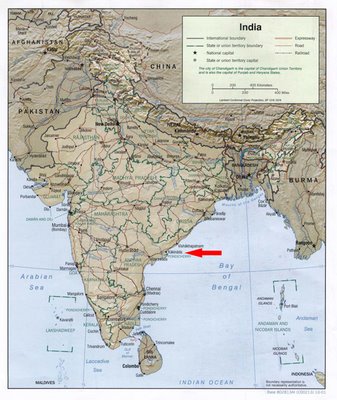 India continues to grow its naval presence, as set out here:

The Indian Navy is getting a new base on the country's east coast. It is 50 kilometers south of Visakhapatnam, where the navy's eastern command is headquartered. This is India's second east-coast naval base, and it is designed to help protect the country's trade with Southeast Asia and to keep a wary eye on China's naval posture in the Bay of Bengal.
***
The proposed base on India's east coast is the latest addition to its rapidly growing naval and maritime profile. India's navy is the fifth-largest in the world. It has ambitions of becoming a blue-water navy, and another naval base will contribute to realizing this ambition.

India describes the waters extending from the Strait of Hormuz to the Strait of Malacca, from Africa's east coast to the western shores of Australia as part of its "rightful domain". An overwhelming proportion of India's imports, especially its oil imports, come by sea. Control over sea lanes of communication (SLOCs) is therefore vital for realization of its dreams of becoming a global economic powerhouse. All this requires a naval and maritime fleet that can protect the SLOCs.

India's "Look-East" policy has resulted in increased economic, strategic and other engagement with Southeast Asia. Over 50% of India's trade passes through the Malacca Strait, making security of this waterway, particularly in the context of piracy there and the lurking threat of maritime terrorism, a crucial security concern for India.

"The political-strategic intent of the new base is to build sinews for India's "Look-East" policy not only in trade terms but also in the context of the evolving maritime balance of power in the Asia-Pacific," says Prabhakar. China is the dominant concern. "The proposed base would have comprehensive anti-air, anti-submarine and amphibious capability, meaning a greater allocation of priority to the emergent Chinese naval force posture in the Myanmar region."