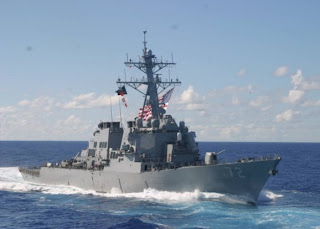 As reported in US uses unmanned drones to hunt Somali pirates:

American warships off the lawless Somali coast are using unmanned drones to hunt pirates threatening one of the world's most important shipping lanes.

Sailors aboard the USS Mahan told The Associated Press they have been using the spy flights daily to spot potential pirate mother ships.
***
The drones can fly more than 3,000 feet (915 meters) above sea level and relay pictures detailed enough to recognize the flags flown on fishing boats that Somalis use to avoid detection.
***
On Thursday, pictures taken by the drones, some of which also are equipped with night vision, helped apprehend nine pirates after a night flight relayed pictures of a skiff with a ladder onboard. A skiff had fired a rocket- propelled grenade at a merchant vessel in the area earlier.

The American warship dispatched helicopters to provide surveillance and air cover, and it deployed a boat with a search and seizure team.

Automatic weapons and rocket-propelled grenades were found and the nine men onboard were detained, although they had thrown the ladder into the sea. Still, the pictures of the ladder taken by the drone can be used as evidence, as the coalition steps up efforts to pursue the pirates through the courts as well as the waves.

Pirate mother ships often are used to tow smaller skiffs out to sea and resupply them. 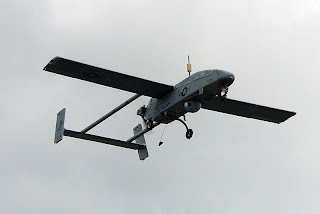 Photo is of a Navy Pioneer UAV - and may not represent the actual UAV being used in anti-pirate operations. More on the Pioneer.
Posted by Mark Tempest at 2/15/2009 02:13:00 PM