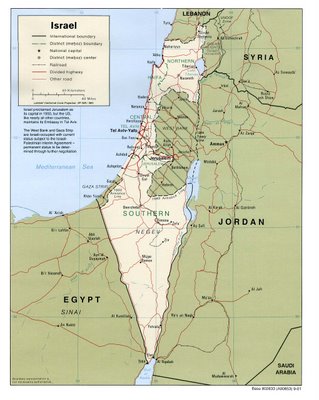 Interesting read here on the inshore (that's at sea, but close to shore for all you lubberly types) anti-terror efforts of one of the nations that has needed to develop some expertise in the area. For example:

In the past five years there have been several other attempts by terrorists to attack Israel from the sea.

* In November 2004, a heavily armed terrorist in a wetsuit was shot and killed after IDF/Navy surveillance spotted him attempting to swim in from the sea and attack a settlement in northern Gaza.
* In November 2003, Israeli security forces arrested an Islamic Jihad fugitive who was recruited to assist in planning and launching attacks from the sea.
* In January 2003, an IDF/Navy gunboat on patrol off the north Gaza coast spotted a suspicious craft sailing in a restricted area. When the craft ignored warning shots to halt, the crew shot it, and the explosive-ridden craft blew up.
* In November 2002, a naval command post in the Gaza Strip spotted a Palestinian fishing craft that had entered Israel's territorial waters and was sailing in a restricted area. A IDF/Navy patrol boat was sent to inspect the boat, whose crew ignored calls to halt and blew up near the gunboat, wounding three soldiers.
* In August 2002, an IDF/Navy command post in the Gaza Strip spotted an armed terrorist wearing a wetsuit leaving the water and approaching a nearby Israeli community. An IDF patrol sent out by the command post shot and killed him. He was carrying a Kalashnikov rifle, eight grenades, four ammunition clips and two containers of acid.
* In July 2002, security officials seized a shipment of guns and other weapons intended for the Palestinian Authority at the Israeli port of Ashdod. Two months earlier, a container had been packed with crates supposedly filled with a donation of toys sent to the Gaza Strip by an Islamic charity, but Israeli officials found they contained hundreds of pounds of guns, ammunition, telescopic lenses, and night-vision equipment.
* In June 2002, IDF units thwarted an attempt by terrorists to infiltrate Israel in the north Gaza Strip. Security forces spotted two terrorists swimming near the Gaza settlement of Dugit. The soldiers shot and killed the terrorists, who were carrying a bag with grenades, a Kalashnikov rifle and four ammunition clips.

And the danger continues:

The security vacuum that formed in the wake of Israel’s September 2005 withdrawal from Gaza emboldened terrorist groups to make five attempts over the past eight months to smuggle weapons and explosives into Gaza via the sea. In just the last two weeks alone, Israeli naval forces intercepted more than a ton of high-grade military explosives in two separate attempted smuggling incidences involving fishing boats off Gaza. The desperate situation has prompted the Israel Defense Force to unveil new counter measures including a robotic patrol vessel to deal with terrorist suicide bomb boats.