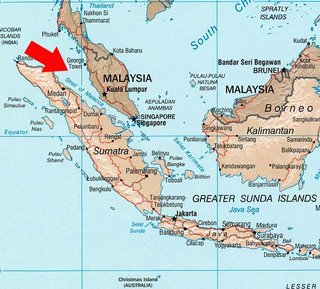 The United States has pledged not to interfere in efforts by Indonesia, Malaysia and Singapore to combat piracy and terrorism in a busy regional shipping lane, Malaysia's No. 2 leader said Thursday.

Deputy Prime Minister Najib Razak said he received the assurance from Adm. Gary Roughead, the visiting commander of the U.S. Pacific Fleet, during their talks Thursday.

The discussions focused on regional security issues, including the Malacca Strait that separates peninsular Malaysia and Indonesia's Sumatra island. It is one of the busiest and most pirate-infested shipping lanes in the world.

"He stressed that the United States respects the sovereignty of the littoral states that have a jurisdiction over the Malacca Strait," Najib told reporters. "They won't take any action that could jeopardize this principle."

Well done, Adm. Roughead! Sovereignty issues are very important to the littoral countries along the strait and they are finally working together to solve the piracy problem. Exactly the right approach.
Posted by Mark Tempest at 5/18/2006 07:01:00 AM