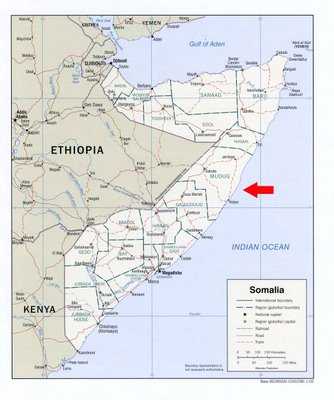 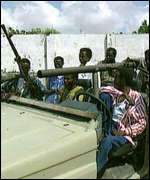 The battle for Somalia rages on as indicated by this report:

Armed militia from Elhur village of Mudug region in central Somalia seized forcefully a key road links Harardhere district to Gann coast in the region where is base for a group alleged on piracy.

Militiamen armed with battlewagon vehicle known ‘technical’ mounting with anti-aircraft gun, have confiscated the control of key road links to Harardhere district from a group of pirates.

The militiamen said they have won capturing the area with no casualties, but there is a fear that they might clash with former militia in the town.

The report says the raid the new militiamen seized the control of the road was to prevent the acts of piracy in the region.

Harardhere coasts of Mudug region in central Somalia became station for Somali pirates since 2005, where many ships and boats hijacked from different locations had been commandeered there for ransoms and there were no administration to stop the piracy.