A Naval Hero for Sri Lanka 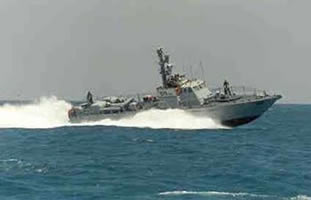 In the front lines against terrorism, sometimes a decision made in a split second may save lives even at the cost of one's own life. From LankaWeb News comes the story of the Sri Lankan Navy taking on Tamil Tiger terrorists and saving the lives of 710 men at the cost of 18 brave sailors.

On 11th May 2006, P 418 was assigned to patrol the seas off terrorists dominated coastline Chalai in the North-eastern coast of Sri Lanka. His crew comprised of 18 men, including one Signalman from Sri Lanka Army. His Third-In-Command, Sub Liuetenant Dinesh Harshjeewa Rathnayake was a batchtop cadet who was trained in Britannia Royal Naval College, Dratmouth UK. He was by his side when they sensed that the terrorists were up to something.

The terrorists, LTTE sea tigers were observed to be gathering off the coastline of Vettalaikerni, a fishing village at the coastline since mid afternoon by the patrolling FACs. They observed terrorists fibre glass boats fitted with medium calibre weapons and lethal weapons gathering very close to the coastline about 50-100 meters from the shoreline and also the presence of at least four suicide craft. The suicide craft distinguishable from their features had been the most lethal weapon terrorists used and Navy have good experience in encountering them in earlier confrontations.

Since terrorists intentions were hostile, the patrolling FACs requested re-enforcements and another two FACS arrived at the location. Having assessed the tactical picture they decided to form a barrier at a distance of 5 Nautical miles from land since Passenger Vessel Pearl Cruise was on the way from Trincomalee with 710 Service, Police personnel and few civilians. This vessel sails almost on daily basis, transporting Service personnel from Kankasanthurai to Trincomalee and back. The vessel was escorted by another two FACs and one Fast Gun Boat. They were about 25 miles from the terrorists gathering which by now has increased to 16 attack craft and 4 suicide boats.

FACs could only observe the gathering and report since attacking the terrorists boats at that close to shoreline could hurt innocent fishing folks of the fishing hamlets along the coastline. SL Navy men has to look after all Sri Lankans.

It was the terrorists that made the first move by speeding towards the passenger vessel. Having realised the gravity of the situation the four FACs singlehandedly decided to confront the terrorists without waiting for further re-enforcements. Against overwhelming numbers of terrorist boats fitted with wide variety of weapons such as 23mm, 14.5mm and supported by terrorists’s never-to-operate-without suicide boats, the balance of power favoured the terrorists.

Undeterred men in blues took up their position, donned their body armours and allowed terrorists to come away from land. One of the FACs, P 497 commanded by Lieutenant Lakshitha Rathnathilake reported over the radio that whilst increasing to combat speed one of his main engines had stopped. Senior most officer on the scene. Commander Lalith Prasanna Edirisinghe who was just 1500m away from his troubled buddy promptly responded and manoeuvred his craft between the approaching cluster of terrorist boats and the troubled P 497. Proving his valour and outstanding officer qualities he engaged the terrorists cluster in order to give time for his buddy to get the engine re-started.

Whilst Lakshitha Rathnathilake was pulling out, he observed that his senior officer was heading straight to this large suicide boatwhile avoiding several terrorists attack crafts. Before he could speak over the radio, there was a cracking in the communication set and with that a huge explosion was observed at some 1500m away from him. As the smoke cleared he could not see P 418, not even the wreck.

It was Lalith Edirisinghe, being the senior officer in the theatre of operation, took charge of the developing situation and decided to sacrifice his life and the 18 of his men in order to ensure that the Pearl Cruise with 710 lives is safe.

Of such actions, legends are made. Render honors.