Latest ICC Commercial Crime Services Piracy Report to 22 May 2006 is here. Highlights include a warning about the 19 incidents of piracy in Chittagong anchorage, Bangladesh, some attempted boarding in Jamaica, Singapore Straits, the Arabian Sea and the previously reported assault on a Russian ship off Guinea (see here).

Previously unnoticed by me was this incident in Indian waters:

30.04.2006 at river Krishna, Andhra Pradesh, India.
Four armed Maoist and a female accomplice boarded as passengers onboard two passenger vessels. Most of the passengers and crew were forced to disembarked but ten people were held as hostages. The hostages were later freed and the Maoists blew up the vessels. The hijackers were then pursued by armed police as they tried to escape. 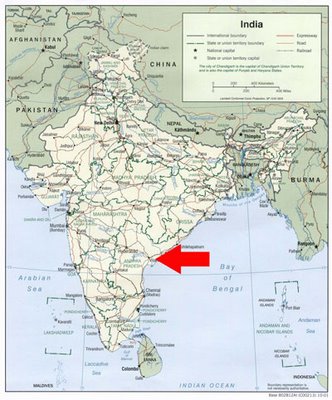 Sunday night police shot dead the four hijackers and a woman accomplice after a five-hour chase on the River Krishna in Andhra Pradesh state, Press Trust of India reported.

The hijackers, disguised as passengers, boarded the ships Sunday morning and quickly pulled out their guns. They forced most of the 234 passengers and 35 crew members to disembark, keeping about 10 people as hostages.

The Maoists later freed the crew, blew up the boats and were fleeing when the police followed them and gunned them down.

All of the tourists, who reportedly were on an outing to an island museum, were brought back safely.

The Maoists said the hijacking was done in reaction to the police killing of nine of their comrades three days earlier.

Friday four Maoists, including a woman district leader, were killed in an encounter with police in the Tadvai forest area of Andhra Pradesh.

At this rate, the "Maoists" are going to be very miffed, even as their numbers are dwindling in some sort of Darwinian manner. I mean, "Maoists?" People in favor of this sort of thing?

UPDATE: Spurred into some quick research by commenter Alex from Yorkshire Ranter (yes, Ma, he says he's one of them Socialists, but at least he's honest about it), came across this BBC bit from 2004 on the Maoists of India, especially in Andhra Pradesh:

The PWG also established links with the Maoist Communist Centre of Bihar and the left-wing rebels active in neighbouring Nepal.

While the group has since spread its area of influence to other parts of India - it is most active in Andhra Pradesh, Orissa, Chhattisgarh and Maharashtra.
***
There were reports that the group was in talks with other left-wing rebel organisations to try to establish a "revolutionary zone" from Nepal to Andhra Pradesh.

No one knows the exact strength of the group - but official assessments vary from a 600-strong cadre in Andhra Pradesh to about 3,500 across India.

But there has been a sharp decline in the quality of recruits recently.

While its revolutionary ideas used to attract educated professionals, the lure of money and power led many criminals to join the group in the 1990s.

The organisation now largely relies on extortion to fund its activities, reportedly collecting between five and $10m a year.

PWG, for those of you who decide to not hit the link, stands for People's War Group.

In the past I have expressed concern over radical Islamist groups that are funding or may attempt to fund their activities with hijacking of vessels and their crews for ransom. The PWG may be in that mold, although apparently unsuccessful this time.
Posted by Mark Tempest at 5/23/2006 01:46:00 PM