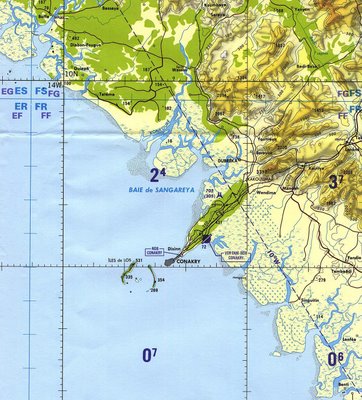 04.05.2006 at 0120 LT in posn 01:23.5N - 104:27.0E, off Horsburgh lighthouse, Singapore straits. A speedboat with five pirates on board fired upon a bulk carrier underway. D/O raised alarm; crew mustered, switched on deck lights and secured doors. Four heavily armed pirates boarded, broke open bridge door and tied up the crew and threatened to kill them. Pirates stole ship’s cash, equipment and valuables and cash from crew and escaped.

2.05.2006 at 1030 LT in position 09:13.1N - 014:06.2W, off Conakry, Guinea.
A chemical tanker drifting 25 nm off the port received a VHF call by someone claiming to be from Conakry port. Caller asked the ship to rig the pilot ladder as the pilot was on the way. Soon after D/O noticed a grey boat with five persons being launched by a mother fishing vessel nearby. Persons in the boat were armed with automatic weapons and wore life jackets. They pretended to be officials and demanded pilot ladder to be lowered. As the ship was not expecting to berth until following day, master raised alarm and crew activated fire hoses. After following for some time boat returned to the mother ship. Master reported the incident to port authorities.
***
22.04.2006 en route from Belawan port to Batu Licin, Banjarmasin, Indonesia
A tug towing an empty barge departed Belawan on 13.04.2006. Last known position on 22.04.2006 was 02:07S - 108:47E. The tug/barge and 12 crewmembers are still missing and they are believed to be hijacked.

The report from Guinea is particularly interesting as it shows a degree of sophistication not observed in the routine "sneak aboard and rob" scenario...

Upper map is of Conarky area of Guinea.