May 22 is National Maritime Day 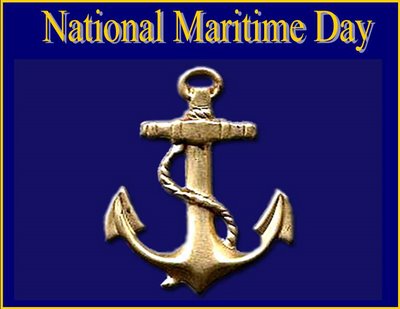 I'm sure you celebrate National Maritime Day every year, right? A day to honor the merchant marine and their proud history as set out here. While we tend to forget World War II except for big events like Pearl Harbor and D-Day, the Merchant Marine did a lot of dangerous sailing in harm's way and paid a heavy price:

The merchant marine and American shipyards were crucial to victory in World War II. Then, as now, the United States Armed Forces could not fight a war overseas without the merchant marine and commercial ships to carry the tanks and torpedoes, the bullets and the beans—and, in World War II, the troops across the ocean. Merchant mariners and their shipmates of the Navy Armed Guard sailed across the Atlantic, the Pacific, through the Indian Ocean, and across the Arctic Circle to Murmansk. They carried nearly 270 billion long tons of cargo--the average rate of delivery in 1945 was 17 million pounds of cargo every hour. They had been the first to go; merchant ships were being captured and sunk even before the United States officially entered the war. And they were the last to return; it was ships sailed by merchant mariners that brought the GIs home.

None of them had to go sea. They were all civilians, and they could have had other jobs in the booming wartime economy. Yet they went. Some were in their 70s, some were in their teens, but most were able-bodied men and women in the prime of life.

It was dangerous work. Nearly one in 30 of those who served in the merchant marine did not return. More than 6,000 American seafarers and more than 700 U.S. merchant ships fell to enemy action. No branch of the Armed Forces, save the Marines, suffered a higher casualty rate.

Honor all these brave sailors on May 22.

Photo is of SS Baton Rouge Victory being towed due to damage.