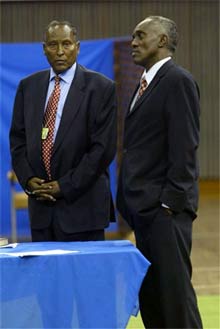 Somalia's president says the United States is funding an alliance of warlords fighting radical Islamic militias in his country - and the US should be working directly with his government instead.

Speaking during a two-day visit to Stockholm on Wednesday, Abdullahi Yusuf Ahmed said: "We think it is true, they are supporting the warlords."

Rumours of US support for the alliance, which includes members of the interim Somali cabinet and armed businessmen, have become rampant in Somalia.

The US said American officials had met with a wide variety of Somali leaders in an effort to fight international terrorists in the country.

Ahmed said he believes the American government is supporting the warlords-turned-politicians as a way of fighting several top al-Qaeda operatives, protected by radical clerics.
***
Ahmed said: "They really think they can capture al-Qaeda members in Somalia.

He said US support for the warlords could undermine the Somali government's efforts to bring stability to the region: "These groups, they really do not want Somalia to become a stabilised country. They do not want the government to function."

Exactly who declared this guy the president of Somalia? Oh, yes, it was the "warlords' parliment":

Abdullahi Yusuf has been elected the new President of Somalia by the warlords' parliament in Kenya. President Yusuf, himself a warlord and leader of the autonomous Puntland region, was hailed by the Somali MPs but described as a "war criminal" and "dictator" by others. Somaliland fears renewed tension after Mr Yusuf's election.
***
The new Somali President has been a key player in Somalia for over a decade. He participated in ousting Dictator Barre in 1991. Based in Ethiopia and receiving Ethiopian aid, Mr Yusuf already in the 1980s formed one of Somalia's first armed factions, the Somali Salvation Democratic Front. Since that, Mr Yusuf has been one of Somalia's most influential warlords.

In 1998, Mr Yusuf participated in the creation of the Puntland proto-state in north-eastern Somalia. The government set up in Bossaso assured relative peace and stability in the large territory it controlled, but pledged to reunite with Somalia when peace had come.

While being Puntland's military President, Mr Yusuf however earned a reputation of not respecting democratic ground rules. His Puntland administration is accused of poor transparency and embezzling public funds while the population currently is suffering from the worst regional drought in decades. Political conflicts in Puntland were regularly solved by turning to arms.

Mr Yusuf's Puntland is also the only Somali authority that seriously has threatened the neighbouring self-declared republic of Somaliland, a former British colony that has been independent and peaceful since 1991 but yet has to be recognised by the international community. Puntland troops are occupying a small part of eastern Somaliland; as defined by the border between former British Somaliland and Italian Somalia.