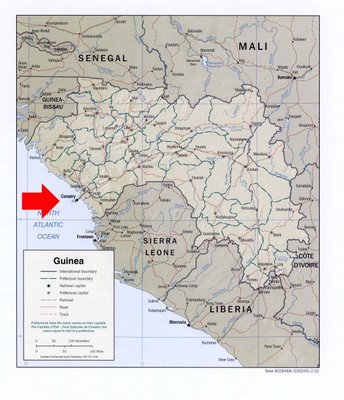 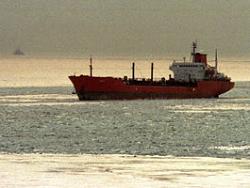 The Shkotovo tanker of the Primorye sea shipping company was attacked by pirates 55 miles off the Guinea port of Conakry.

A high-speed cutter of six armed pirates reached the tanker and they embarked, the tanker captain informed the Vladivostok maritime search and rescue center at 6:15 p.m. local time.

The captain had to give the ship money to the pirates, and they left. None of the 20 crewmembers was hurt.

UPDATE: Some interesting problems being expereinced by Chinese fishing vessels operating in the area, as reported here:

Frequent attacks by Guinean pirates on Chinese fishing vessels operating in Sierra Leone's territorial waters because of lack of protection by the naval wing of the RSLAF may give cause for the Chinese to scale down their fishing operations in the country to a bare minimum as they go in search of new fishing grounds within the sub-region that are considered safer.

One of the recent victims, Mr. Cherili Then, the captain of Okfish-19, one of the registered fishing Chinese fishing vessels said through business partner, Okeky Fishing Agency, they are paying a high royalty and licence fees to the government besides the supply of fish to the nation but they operate under very difficult and hazardous condition especially as they lack armed protection from the country's naval wing.

The Chinese, who suspect the pirates to be Guinean soldiers, say they are afraid now to operate on the high seas because they are apparently being told that Lungi, Yelibouya, Santana and Bonthe islands all belong to Guinea and that they will spare no one who enters these waters without their permission.

He said they very often take over their vessels and forcefully convey them to Conakry where they will loot the boat before releasing it.

In the process of looting, the captain was beaten up and all his personal belongings and that of his crew stolen.

When they contacted the navy for rescue, they could not respond because, according to officials, they do not have adequate boats to chase the Guinean pirates.