Submarines for fun, profit and anti-piracy

Found here, the tale of a new sort of submarine force from the Middle East:

In a workshop inside the Jebel Ali port complex on the fringes of the thriving Gulf emirate of Dubai, an Indian labourer in a yellow jumpsuit is busy sweeping the deck of a gleaming 20-metre-long (65 feet) white yacht while others are in its sleek glass-roofed cabin installing a toilet.

But the Proteus, ordered by a private client for six million dollars (4.8 million euros), is not your run-of-the-mill boat.

It is capable of turning into a submarine and going to depth of 20 metres (65 feet) under water.
***
The company began operations in March of last year with an initial capital of 15 million dollars from the Port Customs and Free Zone Corporation (PCFC), the Dubai government entity that oversees the city's ports including Jebel Ali.
***
It has already secured an order for 10 black Submersible Patrol Vessels, which is the law enforcement version of the Proteus, at 15 million dollars each from the government of Indonesia to combat sea pirates... 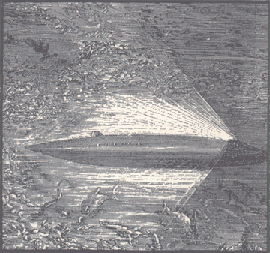 Of course, it might also work for smugglers and other bad guys. As I recall, Captain Nemo had a little piracy in him...

Photo above is, of course, of the James Bond Lotus Esprit Submarine Car. The other is of Jules Verne's Nautilus from Chinfo.
Posted by Mark Tempest at 5/17/2006 10:12:00 AM