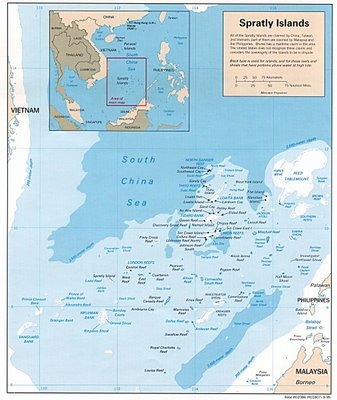 Four fishermen were killed in the Spratly Islands, as first noted here. As post in the update to that report, the Chinese asserted the killers came from the Philippines. Now, the Republic of the Philippines says here that it was not a RP boat:

The Jinghai 03012 has since returned to its home base on China’s southern Hainan Island with the three wounded crewmen in stable condition.

President Arroyo’s executive secretary Eduardo Ermita confirmed that the government received a request from the Chinese for an investigation, but cautioned them against assuming quickly that the attackers were Filipinos.

Political and security analyst Rommel Banlaoi, a Spratlys expert, said the attack was “a piracy issue” rather than a state territorial conflict.

Banlaoi said pirates from Indonesia, Malaysia and the southern Philippines are known to attack ships in the area, and no one should immediately assume that the attackers were Filipinos.

“The South China Sea is a major flash point and reports like this could trigger conflict,” Banlaoi said.

The Spratlys are a chain of more than 100 small islands or reefs that are believed to sit atop vast mineral deposits. They are claimed partly or entirely by Brunei, China, Taiwan, Vietnam, Malaysia and the Philippines.

All claimants are governed by a code of conduct to maintain the status quo and avoid actions that could incite armed confrontation in the area.