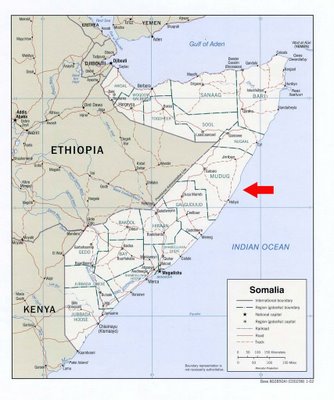 Currently, the most dangerous waters in the world as far as pirates go are those off Somalia, espcially, as noted before in the wild mid-South area off Harardhere. Now, following a long maritime tradition in such cirmcumstaces, merchants are banding together to provide some sort of security for UAE shipping headed into Somali waters, as reported in the Khaleej Times here:

The Somalian Business Association in Dubai has decided to deploy its own armed security to protect the crew of cargo vessels sent from the UAE to different ports in Somalia....

The decision came in the light of the recent hijacking of two cargo vessels Lin 1 and MV Al Taj flying UAE flags by Somalian pirates within a month.

According to Abdul Kareem, a member of Somalian Business Association, the security launch will escort the cargo vessels when it arrives in Somalian sea until it returns from there.

“We held a meeting to discuss how to tackle the problems of pirates. Because of the pirates we lost a lot of money. We are concerned about the life of the crew members also,” he said.

He disclosed that they will spend half a million dollars to facilitate security in the Somalian waters. The menace of the pirates is growing.

“Somalia does not have a government at the moment. So we do not have any other alternative than use our own security system,” he added.

“We are shocked to learn of the brutal murder of Jumma Osman, a crew member of MV Al Taj, the cargo vessel hijacked in Somalian waters on April 27. More than money the life of crewmembers of cargo vessels are important for us. We will do our level best to tackle the problems created by the pirates,” he said.

More on the killing of Jumma Osman.

There is also a substantial force of naval ships from a variety of countries patrolling off the coast of Somalia, Aden and other areas off the Horn of Africa. No word of the contractor allegedly hired by the putative Somali government to get a handle on piracy (for a lot of background on that project, see here.) And, no, I don't know if the current idea involves a modern version of Q-ships.
Posted by Mark Tempest at 5/15/2006 07:15:00 AM