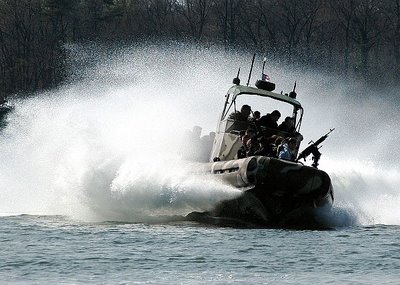 According to Rear Adm. Donald Bullard, NECC’s commander, Riverine Group 1 is just one element of the newly created NECC, which integrates all war fighting requirements for expeditionary combat and combat support elements so the Navy is more capable, responsive and effective in the global war on terrorism (GWOT).

“We know there are many areas around the world where rivers are the main lines of communication,” said Bullard. “We, the Navy, need to expand in order to go into that brown water environment, to be able to train and work with our combined allies and neighbors and make those lines of communication secure.”
***
Cmdr. William J. Guarini, commander of Riverine Squadron 1, ended the ceremony proceedings with an excited “Hooyay Riverines!”

“Standing here today, commanding and establishing Riverine Squadron 1 is the greatest moment in my naval career,” said Guarini. “Once trained, we will be the Navy’s face in the global war on terrorism.”

Riverine Group 1 is preparing to deploy next year and will be made up of three squadrons and approximately 900 Sailors.

Back in April, the US Naval Institute held a seminar on Riverine Warfare which is wrapped up here. Here's a take on the environmental conditions that prompted the rebirth of the Riverine Force:

The goal of naval thinking today, said Bullard, should be to “build awareness from the blue water to the green water to the brown water, in an integrated battle space.” The maritime environment is a more complex matrix now. “You have to put riverine into this bigger picture,” Bullard said. “It’s not alone.”

Navy Rear Admiral Donald K. Bullard stressed the importance of placing riverine ops in a larger context.
Even as its own operational subset, the riverine role is an expanding one; the goal ultimately is to bring area control, counterpiracy, interdiction, insert/extract, fire support coordination, and identify/locate/destroy missions firmly and officially into the riverine sphere.

The global war on terror is the Navy’s cue to rethink itself, suggested Bullard, and pointed out “the three r’s” as providing the rethink methodology. 1) Reorganize accordingly. 2) Recognize; that is, recognize “where the gaps are ... where we need to expand into new capabilities” to be an ever-more viable fighting force in the war on terror. 3) Redistribute “the current force structure in the Navy” to add fluidity to the Navy’s ability to fight this new kind of war in a new century.

And a Riverine Group website here. The photo is of a Riverine boat in action. Caption: