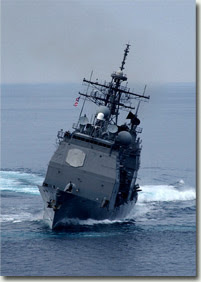 The U.S. Navy says it has detained seven suspected pirates in the Gulf of Aden.

The detentions are the first made by a multi-national force patrolling the waters off Somalia.

The Navy's Bahrain-based 5th Fleet says the suspected pirates were detained Wednesday after a merchant ship sent a distress call.

The Navy says the crew of the Marshall Islands-flagged ship Polaris reported that gunmen had tried to board the vessel from a skiff.

The Navy says a team from the USS Vella Gulf, a guided missile cruiser, intercepted a skiff matching the description given by the merchant vessel and detained the seven men on board.

It says the suspects will be transferred to a temporary holding facility on a military supply ship.