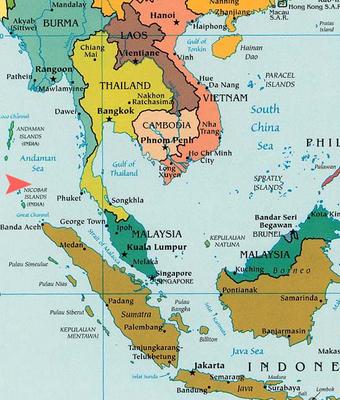 New sea lanes are hard to come by, but India is planning ahead (as is China, the US, Thailand...) for the possibility of a canal dug through Thailand, as reported here

"But the fact with things like the Kra canal, the Andaman and Nicobar islands will come into play," he said.
Plans to dig a canal across the narrow Kra isthmus in southern Thailand have been bandied about for more than 300 years.
The idea has some support among Thai politicians but has stalled over the huge potential costs and environmental impact. A railroad to carry oil across the isthmus has also been discussed.
Singh, who visited tsunami-hit areas of Thailand last week with his Thai counterparts, did not disclose any knowledge of fresh plans for a Kra canal.
But a report prepared for U.S. Defense Secretary Donald Rumsfeld, leaked to the Washington Post in January, said China was willing to underwrite construction of the $20 billion canal, complete with port facilities, as part of its "string of pearls" strategy of forward bases and energy security.
"So then you have an alternate route for shipping," Singh said in the interview held late on Wednesday at his headquarters atop a hill in Port Blair, capital of the Andaman and Nicobar islands. "It will be like another Suez Canal."