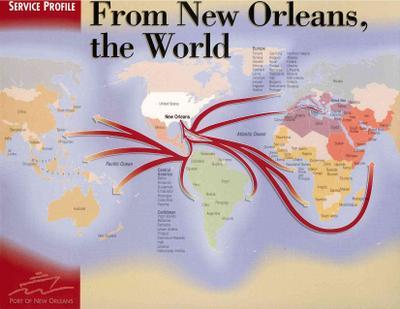 Must read here on post-disaster port operations and a request for meaningful federal aid to what, after all, are national assets:

(testimony of Gary P. LaGrange, President and Chief Executive Officer of the Port of New Orleans and Chairman of the American Association of Port Authorities) Within a one-month span, Hurricanes Katrina and Rita have impacted over twenty ports in the Gulf of Mexico that are members of AAPA, and many additional private and public ports in the region. The impact of these hurricanes has varied, with the largest impact on the ports of Louisiana, Texas, Alabama and Mississippi. For several ports, including New Orleans, the impact has been considerable; some of the facilities may need to be relocated, and it will take months if not years to fully recover. In New Orleans, for example, we are only 20% operational...

...This nation is heavily dependent on maritime trade. America’s ports are our gateways to the world and a critical component in the nation’s economic health and national defense. When ports are impacted, there is a quick and sizable ripple effect throughout the economy. U.S. ports and waterways handle over 2 billion tons of cargo annually. Much of that commerce flows through the impacted ports in Louisiana, Texas, Alabama and Mississippi. These ports are heavily linked to this nation’s petroleum, grain and farm products, fruit, poultry, coffee, chemical and steel trades. The Port of New Orleans serves as the focal point for waterborne transportation of cargo to 28 states. That cargo activity supported $37 billion in economic benefits to the country and generated $2.8 billion in federal tax revenue.

Agricultural products from 17 Midwestern states flow through the Mississippi River. Over half of the grain exports for this nation depart from ports impacted by Katrina. Oil, agriculture and chemicals rely heavily on the infrastructure provided in these port areas. Additionally, these Gulf ports serve as one of the nation’s largest gateways for poultry exports, and the inability to handle frozen poultry products through unique dockside facilities would affect the industry worldwide. Estimates for the Port of New Orleans shows that relying on less efficient means to transport these products would increase costs by $7-to-$8/ton, thus making U.S. poultry products extremely noncompetitive in the international marketplace.

Steel is another commodity handled by the Port of New Orleans. The cost of diverting steel imports from New Orleans would increase the cost of such products by an estimated $80-to-$90/metric ton because of reduced access to inland barge and rail transportation systems and associated delay costs.

Cruises are also an important component of many ports activities, including the Port of New Orleans, which prior to Katrina was the fastest growing cruise port in the World. Cruises provide significant tourist trade, jobs and income for New Orleans and the region, and their rebound will depend heavily on the ability of New Orleans to rebuild.

Catastrophic events, whether natural or man-made, can greatly impact maritime trade. Hurricanes are especially dangerous and are the most frequent threat since ports are located in coastal areas. Ports also are impacted by other disasters, such as earthquakes and terrorist events. My written testimony today also includes some examples of lessons learned by ports from disasters prior to Katrina and Rita.

For Katrina and Rita, the impact on New Orleans has been considerable. There are several key things that are important to the port’s recovery: quickly reopening the channel; restoring communications; getting a power source (electrical or fuel-generated); manpower; and repairing facilities and intermodal connections (reliable truck and train traffic).

The Maritime Administration also should be commended. It took the historic step of diverting the military ready reserve ships to help ports get open quickly. Marad provided a ship in New Orleans where workers could live, since much of the city is still uninhabitable. The ship also had cranes and the ability to generate power for the port.

Several other federal agencies stepped in quickly to help out affected ports, and were critical to the ports’ ability to reopen quickly. The Coast Guard, the Corps of Engineers, and NOAA should especially be commended for their vital and timely assistance provided to ports by surveying channels, identifying any obstructions, reinstalling aids to navigation, and providing emergency dredging. These agencies worked quickly and cooperatively to reopen the channels.

FEMA is also an important partner. They direct many of the federal activities and help reimburse ports for rebuilding.

If we are going to spend billions upon billions of federal tax receipts on rebuilding, early money should go to getting the affected Gulf Coast ports back into business.

What are the challenges?

Hurricane Katrina completely shut down the Port of New Orleans. The port has limited electricity, water, sewage and other services, and its terminals and facility were severely damaged by both storms and subsequent flooding. The total closure of the port not only affected the economy of Southeast Louisiana, but also the entire nation. In 2004 alone, more than 380,000 jobs in the U.S. were dependent on the cargo activity at the port.

In the immediate aftermath of Hurricane Katrina and Rita, the Port of New Orleans has been working non-stop to restore its facilities and services. The port is currently operating at only 20 percent of its pre-Katrina level. The Port of New Orleans is still struggling with a limited workforce and the ability to move the cargo in and out of the port. Intermodal connections, such as truck and train, are still a challenge. Mississippi and some Texas ports face similar problems. The roads and rails need to be repaired and/or rebuilt, and workers need basic housing in order to work long-term. The recovery of the Port of New Orleans is tied to the problems of restoring the entire city. Without adequate infrastructure for longer term housing and family needs, workers will not be able to return. Cruises will wait to return until hotels and tourist attractions are restored.

Another challenge will be cleaning up the ports. In addition to wind damage, several ports impacted by Katrina and Rita have spoiled cargos that must be disposed of and storage sheds that must be replaced or repaired.

The port is a major economic engine for the city and the region. Quickly getting the port back in operation more fully will help return economic vibrancy to the area. The port will also be a critical part of rebuilding the city. It can provide a means of bringing in the materials needed for the major repair and reconstruction needed. Should port services not be restored, any rerouting of traditional port cargoes would increase related supply chain costs, includes those associated with trucking and rail services, barging, distribution and warehousing, and ocean freight.

Based upon post-Katrina engineering and other studies, the Port of New Orleans estimates that $1.7 billion will be required to rehabilitate, replace and/or improve port facilities damaged by Hurricanes Katrina and Rita. Other ports in Louisiana, Alabama, Texas and Mississippi also have costs to repair facilities. The Port of New Orleans is the primary economic engine for the region – and if the port returns to full operations, the region will soon follow. With repaired port and intermodal infrastructure and a return of the workforce, the port will be a major factor in the business and economic revitalization so desperately required for the Gulf Coast region.

With all the other issues swirling around the hurricanes, this one, to my mind, should be put front row center.

Drawing is from Port of New Orleans website and show geographic distribution of American goods shipped from New Orleans. Previous posts on importance of the port: here, here, here, here, here, and here. It's like I think its important or something...
Posted by Mark Tempest at 9/29/2005 11:31:00 AM