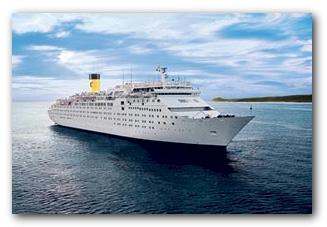 This report describes a paper exercise that ought to get people thinking:

A cruise ship with thousands of tourists on board explodes just a few miles from the terminal in South Boston with terrorists still aboard the burning vessel. Federal, state, and local emergency workers scramble to sort out the bombers from the victims, the kind of bomb used, and how to get the wounded to shore without risking more lives.

The fictional scenario is to unfold today, part of a ''tabletop" homeland security exercise as Boston becomes the fourth of 40 major US ports to check its preparedness for a terrorist assault.
The daylong virtual event at the World Trade Center in South Boston involves the Federal Bureau of Investigation, the Massachusetts Port Authority, the US Coast Guard, Boston fire and police, and the federal Transportation Security Administration.

Organizers acknowledged yesterday that the scenario is not as potentially catastrophic for Boston as an attack on a liquefied natural gas tanker nearing the terminal in Everett, which is the nation's only LNG port in a densely populated urban area. Local officials have for years warned that the targeting of an LNG tanker as it unloaded could kill thousands.
The cruise ship plot, however, is designed ''to get the right people at the table and to give us some challenging issues to struggle over," said Coast Guard Lieutenant Commander Benjamin Benson. Other US scenarios will include a suspicious cargo container and an explosion at a seaport rail yard.

Of course, while I think it's good to worry about LNG, my reading is that it's a harder target than you might gather from the press treatment and the "cruise ship" scenario is a good one.
Posted by Mark Tempest at 9/20/2005 08:18:00 AM