US Marines Practice "Taking Down" a Pirate Seized Ship 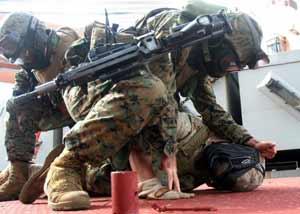 Exercising VBSS (Visit, Board, Search & Seizure) the 31st Marine Expeditionary Unit goes to sea and works with a Military Sealift Command ship in practicing how they would take a pirate seized ship back as reported in Stars & Stripes.

The Marines perform the mission by a show of force. Tuesday, the Harriers swooped in from above and rushed across the front of the ship at about 1,000 feet. As the jets made their pass, the Super Cobra and Huey charged up beside the ship to show force and provide security. One by one, the CH-46s and lone CH-53 came in and either hovered and dropped a fast-rope or set down on the ship’s landing pad, simulating dropping off Marines. The Huey, which hovered off the ship’s side during the drops, acted as a sniper and communications platform. The Super Cobra was there to ensure the intercepted ship’s crew complies, Horton said.

“The Cobra has a 20 mm cannon,” he said. “They point that at the bridge and people tend to stop.”

He has a point.

"Operations aboard a ship differ from other close-quarter encounters because it forces you to be more aware of 360 degrees of security," said Lance Cpl. Vic Madrillejos, a rifleman with the MSPF security element.