Desert Ducks of Bahrain Bid Farewell After 33 Years of Service

Does this mean no more "duck prints" on flight decks?

There are certain things that keep sailors happy, liberty, a good meal, payday, and mail call! Of course in this day and age we have e-mail. But nothing can compare to a letter from a girlfriend or that care package chock full of goodies and pictures from home. Predictable the flight deck team usually has a little more kick on those days. It's amazing how fast the flight deck moves for the Desert Duck. The Desert Ducks are not only famous for their world class service, they have a somewhat dubious signature trademark. They are notorious for "stamping the flight deck." Upon completion of their mission aboard a vessel, the air crewman will run out of the helo at the last minute with a giant stamping device attached to a three-foot pole and stamp several large yellow duck footprints on the flight deck.

Hate to see a great tradition go away... What kind of print will a Desert Hawk leave?

By the way, I have it on good authority that many ships begged the Ducks to stamp their decks... 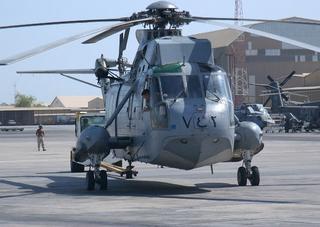 The Navy is retiring the H-3, known in the U.S. Naval Forces Central Command (NAVCENT) area of responsibility as the Desert Ducks. The HSC-26 Desert Hawks assumed the combat logistics role in support of NAVCENT’s maritime security operations (MSO). MSO set the conditions for security and stability in the maritime environment as well as complement the counter-terrorism and security efforts of regional nations. MSO deny international terrorists use of the maritime environment as a venue for attack or to transport personnel, weapons, or other material. The Desert Ducks operated out of Bahrain for more than 30 years. U.S. Navy photo by Journalist 2nd Class Elton Shaw