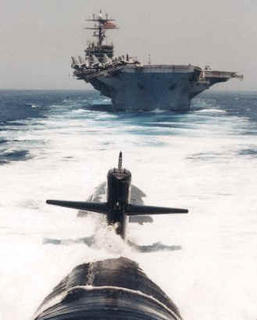 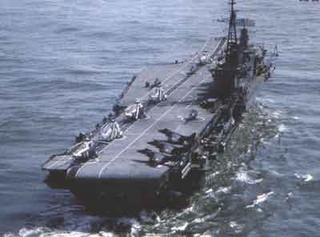 INS Viraat
The budding strategic relationship between India and the US continues with a new round of joint exercises, this time invloving aircarft carriers and increasing complexity:

The cooperation between the US Navy and Indian Navy has moved apace with the relationship between the two countries in the recent years. Seven such exercises have been held so far. The process has been characterised by service-to-service interaction, high-level visits, joint exercises of increasing scope and complexity, and significant co-operation in the field of military training. The ongoing operational interaction between the navies of India and the USA stems from an institutionalised roll-on plan, which is determined and reviewed in successive meetings of the Executive Steering Group. This will be the first time that aircraft carriers from the two navies will participate in the Malabar series of exercises. The thrust of Exercise Malabar this year will be on aviation inter-operability, advanced anti-submarine warfare, sea control missions, fleet air defence, surface firings, maritime interdiction and VBSS (Visit Board Search and Seizure) operations towards anti-piracy and counter terrorism actions at sea. In order to streamline interoperability and derive maximum training value from such exercises, the two navies had evolved Standard Operating Procedures (SOPs), which are regularly tested and updated during these bilateral exercises.

India has also been working with Thailand as reported here: "The exercise, to enhance '"mutual understanding and inter-operability', also focussed on steps to prevent smuggling, piracy, drug trafficiking, illegal fishing and illegal immigration..."
Posted by Mark Tempest at 9/23/2005 12:23:00 PM