Interview of the Month

Matthews
Thanks to Radioblogger for letting us read how the remarkably obnoxious Chris Matthews gets handed it to him by Rep. Peter King here:

Chris, you won't give me a chance to answer the questions. Just because the president doesn't watch you on television, it doesn't mean he's not doing his job. You know, Franklin Roosevelt wasn't hired to listen to radio accounts of D-Day. You're hired to do the job, and the president can do his job without having to listen to Chris Matthews or Andrea Mitchell or Tim Russert, or any of the others. He is doing his job. 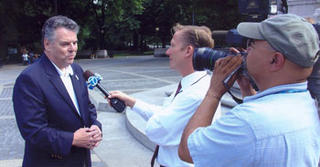