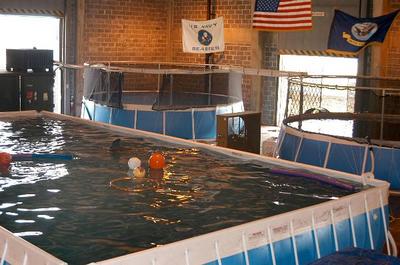 From Navy NewsStand - Eye on the Fleet

A Naval Construction Battalion Center Gulfport facility is currently the temporary home for four displaced Atlantic Bottlenose dolphins. U.S. Navy Marine Mammal Program personnel from San Diego, Calif., installed three aboveground pools, along with other necessary filtration equipment needed to care for sea mammals, Sept. 17. The four dolphins, Kelly, Noah, Jackie and Toni spent the last two and a half weeks in the Gulf of Mexico, swept out to sea by a wave reported to be forty feet high during Hurricane Katrina. Because these dolphins are from a captive facility, they do not forage for food or necessarily have the survival skills needed to avoid predators or boat traffic. Since they were spotted off the gulf coast on Saturday, Sept. 10, Marine Life Aquarium trainers and National Oceanic & Atmospheric Administration (NOAA) Fisheries Service biologists feed the dolphins several times a day from a NOAA vessel. U.S. Navy photo by Journalist 3rd Class Chris Gethings 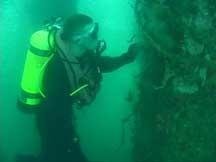 Divers from Underwater Construction Team (UCT) 1, based out of Little Creek, Va., continued to clear a marina here Sept. 17 to that was ravaged by Hurricane Katrina.

The team of 15 divers from UCT 1 is on its fourth day of recovery efforts at the small fishing marina, which provides $15 million in oysters and $5 million in shrimp revenue to the communities of southern Mississippi each year.

According to Chief Builder (SCW/DSW) Margaret S. Cooper of UCT-1, the first priority of the team has been clearing the marina of all the debris collected during the storm surge that hit the area Aug. 29.

Before the storm, most people removed their boats from the marina, but 40 had remained to face destruction. “When we got here, there were only two boats left, and because they were destroyed, we had to fish them out of the water,” said Cooper.

An ice-making facility on the marina was also a major priority for the members of UCT 1. “Pieces of machinery were scattered in the water around the marina, and the owner asked us to recover those first so he could get the facility up and running again,” said Cooper. “The facility can make enough ice for the whole community. It’ll provide people with cool drinks and the fishermen with a way to keep their catch fresh.”

After the bulk of debris visible on the surface was cleared, the members of UCT 1 began the painstaking process of collecting debris hidden below the surface of the murky Gulf waters.