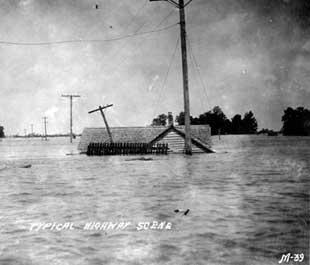 Since history doesn't seem to be America's strong point, it's good to visit this site, which deals with the Great Mississippi Flood of 1927. Levee breaks, Army Corps of Engineer plans to control the river, racism, presidential politics - it's all there. Don't miss the "timeline" section (the first levees in New Orleans were built in 1726!)

Native Americans told the first European explorers to expect the Mississippi River to flood every 14 years. Since then, every generation of settlers to the region has attempted to control the river by building levees, or protective, raised embankments, alongside it. Prior to 1882, Mississippi Delta planters had to rely on their own efforts to build and maintain levees. But local efforts were not always effective. They needed a more advanced levee system, and for that they turned to the federal government.

I remember seeing the show on PBS and highly recommend it to you (it may be available for rent). Also of interest is the book by John M. Barry, Rising Tide: The Great Mississippi Flood of 1927 and how it Changed America (1997) as noted in this review:

In the final part of Rising Tide, Barry explores the role of powerful New Orleans families during the 1927 flood. Entitled the "The Club," Barry conveys a sense of mystery surrounding both the city and the men that controlled it. Barry notes that three men controlled the newspapers in the city and they cooperated in suppressing news unfavorable to the city's business interests. But membership in the all-male social clubs of New Orleans determined who the real insiders were and who made the important decisions. The driving force behind these clubs was the New Orleans banking establishment. Barry writes that the city had nearly twice the economic activity of Dallas and between double and triple that of Houston, Atlanta, Memphis, Louisville, Richmond, or Birmingham. This power led to these clubs having immense control over all New Orleans activities, particularly economic and political decisions.

In the late 1920's, New Orleans was controlled by powerful banking families, all members of the clubs, who exerted enormous control over business and political decisions affecting the city. As a result of having this power, members of these clubs decided to intentionally dynamite the levee to lower the flood level in New Orleans and protect the commerce of the city. The Corps originally proposed destroying the levee in the wake of the 1922 flood when they advised the New Orleans financial community that, if the city was ever seriously with a flood, blowing a hole in the levee would save the city. In the end, the decision to dynamite the levee was made by three New Orleans banking leaders in the boardroom of the Canal Bank. Unfortunately, the result was the flooding St. Bernard and Plaquemines parishes. Barry sadly notes, as two engineers had predicted, the destruction of the parishes was unnecessary and one day's wait would have shown it to be so.