I'll bet this is just...wrong

Navy sea mammal warriors on the loose? Doubt it. And I bet this article is nonsense.

UPDATE: The "source" for this nonsense about "dart armed dolphins" has a spotty record:

Worrying to be sure. We find, however, that Sheridan has made sport of gullible reporters in the past. In 2003, he was confident that he and a team of divers he advised had located the site where English aviator Amy Johnson died, after her plane went into the sea off Kent in 1941. The Guardian carried that item too. Not surprisingly, there has been little news about Johnson's plane since the announcement.
He also appears to have been confident, back in 1998, that a group of US Navy killer dolphins had come to grief off the French Mediterranean coast when they got loose and their handlers detonated a "radio-controlled explosion of their signal collars, so that no one could find out their missions." (Find out their missions?)

And here's another load of baloney:

The neocons also want to access the vast resources of the region ... they also want to use Paraguay as a launching pad along with Colombia to invade Venezuela. 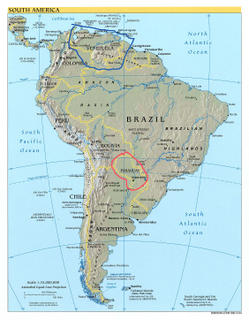 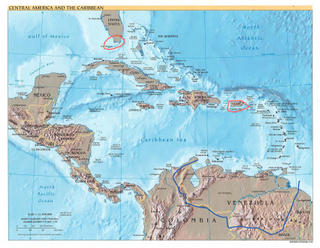 Let's see, distances Asuncion, Paraguay to Caracas, Venezuela- 2500 miles. San Juan, Puerto Rico to Caracas - 550 miles. Miami, Florida to Caracas - 1400 miles. Now explain to me why a base farther away from Venezuela than US territory would be used to stage an attack? Especially one that would require the creation of infrastructure. Does the guy who wrote this garbage own a globe? You know, some things just don't pass the smell test. Just President for Life Chavez paranoia.

Another report mentions the war on terror:

With Bolivia’s recent uprisings, their enormous gas reserves, and a presidential election on the way, some observers suggest this military activity could pave the way for U.S. intervention. Rumors are circulating that al-Qaeda has a training base near Paraguay, a situation that would help to make a case for more aggressive military action in the region.