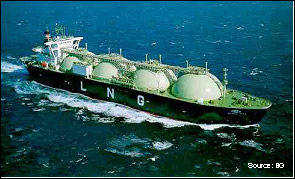 Reported here, the NIMBY, "scaredy-cat" approach taken by some members of the Oregon public near a proposed LNG terminal on the Columbia River near Bradford Landing.

The crowd of several hundred at Knappa High School was heavily dotted with people in red T-shirts with the slogan "I am NOT an LNG "acceptable risk."

Many were from Puget Island in the Columbia River, a tip of which is about a half mile from where the tanks would be placed.

A fireball from the tanks, residents said, could cause second-degree burns to some islanders.

LNG ships, which can be 1,000 feet long, would discharge their cargoes there about twice a week.

"If it goes ahead," said area resident Robert Pile, "the natural setting of the lower Columbia would change radically and for practical purposes forever."

He said while there is an assumption that a disaster will not take place, "the possibility remains."

The "possibility remains" that Mr. Pile could be struck by lightning or hit by a meteorite, too, but the article is silent on his precautions against such events.

Presumably some member of the red t-shirt brigade managed to drive themselves safely to the meeting despite occupying vehicles of the type that routinely result in over 50,000 Americans per year being killed in their operation and countless thousands being maimed and injured. Each such vehicle also carries a highly flammable liquid with the potential explosive power of a large brief case full of dynamite.

But there was wide skepticism Thursday night that the Coast Guard, try as it might, could not guarantee there would not be a terrorist attack on the ships or on the storage site, whose two tanks would hold the liquefied equivalent of 7 billion cubic feet of gas.

Skepticism runs high among many of the 800 or so residents of Puget Island, connected to the Oregon side of the river by a small ferry. The island, part of Washington, is the nearest populated area to the proposed site.

Bill Coons, who retired to the island of small farms and, increasingly, other retirees, 13 years ago said the system probably is safe if it works as it is intended to.

"But if there's an attempt by a terrorist to set one of these off, oh man..."

He said he asked Northern Star, which insists on the safety of the tanks, if they would give island residents life insurance policies.

Perhaps he should ask his insurance agent if his life insurance rates will go up if the terminal is built. I'll bet the answer would be "No" given the low level of risk involved.