The Idaho weatherman who has alleged that hurricane Katrina was part of a Japanese mafia plot to attack America has resigned to pursue his real interest, finding the conspiracy that is using the weather as a weapon, it says here

Since Katrina, Stevens has been in newspapers across the country where he was quoted in an Associated Press story as saying the Yakuza Mafia used a Russian-made electromagnetic generator to cause Hurricane Katrina in a bid to avenge the atomic bomb attack on Hiroshima. He was a guest on Coast to Coast, a late night radio show that conducts call-in discussions on everything from bizarre weather patterns to alien abductions. On Wednesday, Stevens was interviewed by Fox News firebrand Bill O'Reilly.

Stevens said he received 30 requests to do radio interviews on Thursday alone.

Fouch said Stevens wanted to leave as quickly as possible because his "plate is full," and he needs to take advantage of the opportunities that exist now.

Stevens said he's received offers that he's not at liberty to discuss.

Anyone surprised that there's money in being a nut job? Anyone? Bueller?

Does anyone remember that there were hurricanes long before there was a Russia or even a United States? The Galveston hurricane of 1900 and the storms that wrecked so many ships off North Carolina's Outer Banks ring any bells?

UPDATE: Just in case you wonder what his evidence is, you can visit his website which consists of odd ramblings and pictures of aircraft contrails and some old pictures like this one: 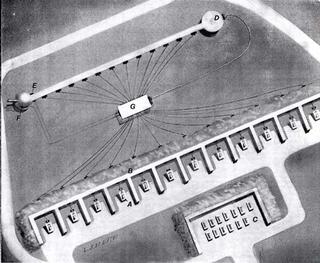 It is supposed to be an artist's rendition from Aviation Week & Space Technology July 28, 1980:

Unfortunately, today in 1981 the Soviet Union has long since discovered and weaponized the Tesla scalar wave effects. Here we only have time to detail the most powerful of these frightening Tesla weapons -- which Brezhnev undoubtedly was referring to in 1975 when the Soviet side at the SALT talks suddenly suggested limiting the development of new weapons "more frightening than the mind of man had imagined." One of these weapons is the Tesla howitzer recently completed at the Saryshagan missile range and presently considered to be either a high-energy laser or a particle beam weapon, (See Aviation Week & Space Technology , July 28, 1980, pg. 48 for an artist's conception.)

This nation has not faced an economic crisis like the one that Katrina will spark in the days and months ahead. But that is one of the reasons Katrina was absolutely guided along the path that we all watched. This path has resulted in maximum damage to the energy infrastructure, transportation infrastructure and to the psyche of those that remain susceptible to further storms this year and in the years to follow. Oh New Orleans!

I fully expect one more 'event' this year to impact the United States. My gut feeling is that it will be an earthquake/volcanic event with intensity of at least 7.5 in magnitude resulting in insured losses to exceed $25 billion. Where will happen? My gut says the Western United States.

Protect your family's wealth with precious metals as the cascading effects from this disaster and from poor government fiscal management, which have just begun to be felt worldwide.

My prayers go out to all who need a helping hand in the very difficult times ahead. The amount of social change that this storm has begun to unleash upon the fabric of American society is just now being grasped by the media, they are always a little slow to pick up on things, but then what's new! Oh how we long for a truly free press.

I love his "prediction." No much of a limb to climb out on is it? If it doesn't happen when he says - he just got the time wrong. If it does happen- well, move over, Jeane Dixon. And what does an earhquake have to do with a hurricane? Nothing, unless you have fervant imagination... a certain degree of paranoia and a complete lack of knowledge of history.

Since I' m getting a lot of hits from people searching for "Russian Weather Machine," let me make it clear that I think this theory is complete and utter nonsense.

UPDATE 2: More nut cases: It's "bad weather for oil profits" here and conspiracy theories run wild here. More fun here with (shh!) HAARP. Gotta like the comments. And yet more on Tesla howitzers and earthquake and weather control here - which also reports the Chernobyl disaster was caused by an American defense system...
Oh, please. Just cue the theremin music (which was the product of Russian research, too, oooh, oooh!).

UPDATE 3: Speaking of wack jobs, let's here it for Rep. Charles Rangel who has apparently decided that history is reversing itself in some sort of Tesla SCALAR induced way as reported here:

Comparing President Bush to the Birmingham, Ala., police commissioner whose resistance to the civil rights movement became synonymous with Southern racism, Rep. Charles Rangel said yesterday of the president: "George Bush is our Bull Connor."

You just never know where the loonies are going to pop up next, do you?

The good Sister Toldjah also reports a spanking of Mr. Rangel by some people more rooted in reality:

Members of the black leadership network Project 21 are demanding that the Congressional Black Caucus (CBC) and Sen. Hillary Clinton (D-N.Y.) join with them in condemning remarks made by CBC member Rep. Charles Rangel (D-N.Y.) in which he called President George W. Bush "our Bull Conner," referring to the 1960s segregationist icon.

"Charles Rangel’s comments are morally vacant and beneath the pale, but obviously not out of character for him and his supporters," said Project 21 member Mychal Massie. "How many blacks today suffer from beatings, fire hoses or have dogs set on them for trying to seek a seat at a lunch counter or go to school? How many of us today are living under inflexible, legislated segregation?"

Massie adds: "Rangel’s comments may play well with those who embrace ignorance, but it will not resonate with Americans who eschew racial demagoguery. We demand that the CBC and Senator Clinton join with this overwhelming majority of their fellow citizens in banishing hate speech such as this to the trash heap of history."