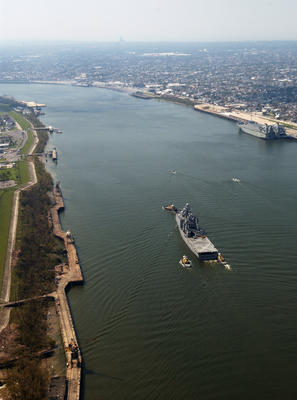 1
The Navy is inport New Orleans and Biloxi and "liberty call" takes on a new meaning as they begin, in USS Tortuga to render aid (photos 1,2 3). In Biloxi, USS Bataan sailors serve up hot meals(photo 5) and "U.S. Navy personnel assigned to Casualty Receiving and Treatment Ship Team Eight (CRTS-8), based out of Naval Hospital Jacksonville, Florida, assist Army and Air Force Reservists as they set up a field hospital on board Naval Air Station Joint Reserve Base New Orleans (photo 4). The detachment from Naval Hospital Jacksonville embarked aboard the amphibious assault ship USS Bataan (LHD 5) to assist in Hurricane Katrina relief efforts along the Gulf Coast of the United States." 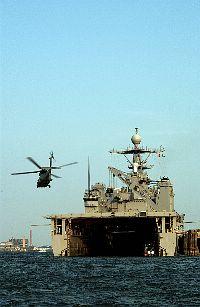 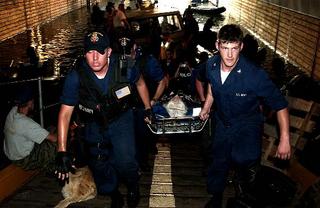 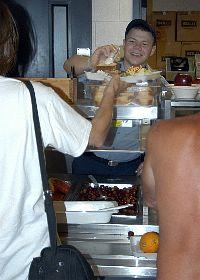 Tortuga's sailors are honored to serve, they’re enthusiastic and want to do everything they can to find people along the Mississippi River, less than a mile from water-logged New Orleans.
Navy SEALS from Little Creek also are helping in search and rescue.
Evacuees could look forward to warm food, a bed and a hot shower.
Some of those coming on board are four-footed survivors, including a litter of Boxer puppies. A makeshift kennel was being made to accomodate man's best friends.
As of 11:30 p.m. Monday, the Tortuga's crew had rescued dozens of New Orleans disaster victims. A message on the ship's Web site said, "So stay tuned, and rest assured -- TORTUGA and her crew is safe and sound tonight...so are many of our fellow Americans as a result of the ship's efforts to get the job done." 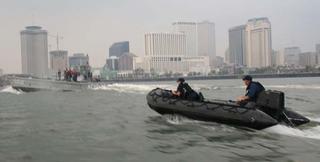 UPDATE 3: Upgraded photo of USS Tortuga steaming up Mississippi and into New Orleans and moved to center top.
Posted by Mark Tempest at 9/06/2005 10:02:00 PM