Attacks on ships increase in some areas, not in others

Here's the headline from the International Herald Tribune: Global pirate attacks increase. The headline is inaccurate.

Pirate attacks rose worldwide in the first quarter of the year, with Nigeria overtaking Indonesia as the country worst plagued by sea bandits, a global maritime watchdog said Wednesday.

Seafarers suffered 49 attacks between January and March around the world, up 20 percent from the 41 recorded in the same period last year, the International Maritime Bureau said in a report by its piracy reporting center in Malaysia.

Nigeria ranked as the No. 1 hotspot amid a lack of effective law enforcement, with its 10 reported attacks — mostly off its main city of Lagos — accounting for one-fifth of the global total, the London-based bureau said.

"Violence in the waters off Nigeria is spiraling out of control," the report said, adding that the true number of incidents could be even higher because many attacks in the oil sector are believed to go unreported.

"It should not take a crisis leading to deaths, bombs and the withdrawal of services by shipping companies before the (Nigerian) government is forced to act," the bureau added.

India and the Gulf of Aden off the north coast of Somalia tied for second place among pirate-troubled territories, with both reporting five incidents apiece. Those in India were low-key attacks aimed at theft, while the Gulf of Aden was prone to hijackings.
***
Other countries recording attacks in the first quarter included Tanzania with four, and the Philippines, Bangladesh, Peru, Angola, Ghana and Mozambique with two each.

So, instead of a "global" increase" in piracy, what we see is an increase in violent acts against ships in the territorial waters of one country - Nigeria.

This is true even taking into account that the IMB includes as "piracy" things like someone climbing up an anchor chain and stealing supplies while a ship is in port.*

Perhaps I am just quibbling, but I do not see a surge in pirate vessels running amok on the high seas. The evidence is that, and this is not much of a surprise, Nigeria is a law enforcement and military mess. 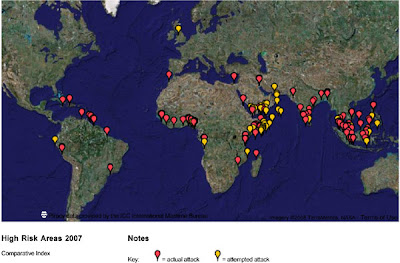 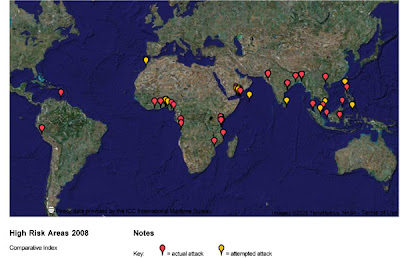 See a pattern of "global piracy?" If so, let me know.

* For example, here's a reported incident of "piracy" from the ICC CCS latest piracy report:

08.04.2008: 0247 LT: Dar es Salaam anchorage no. 6, Tanzania.
Anti piracy watchman sighted one robber near the boson store, on a container ship at anchor. On sighting the watchman, the robber jumped overboard and escaped in a waiting boat. Alarm raised. Investigations indicated duty watch keepers had abandoned their stations to look into a noise they had heard, allowing the robber to access the ship unnoticed. Ship’s stores were found stolen.

The United Nations Convention on the Law of the Sea defines piracy as:

(a) any illegal acts of violence or detention, or any act of depredation, committed for private ends by the crew or the passengers of a private ship or a private aircraft, and directed:

(i) on the high seas, against another ship or aircraft, or against persons or property on board such ship or air-craft;

(ii) against a ship, aircraft, persons or property in a place outside the jurisdiction of any State..,

UPDATE: Nigeria is getting some help in training to patrol their waters, as set out here:

The vessels are to be fitted with communication and radar equipment. Sources said the vessels were being ordered to meet the challenging needs of the menace of Niger Delta militancy as well as provide adequate security for the oil rich Gulf of Guinea.

Already, the Chief of Naval Staff, (CNS) Vice Admiral Ganiu Adekeye left the country weekend for Singapore, Malaysia and Australia to inspect the extent of works on some platforms and armoured-built helicopters being manufactured for the Nigerian Navy. The Flag Officer (FOC) commanding Western Naval command, Real Admiral Ishaya Ibrahim who received the US Navy entourage yesterday at the Nigerian Navy Ship (NNS) Beecroft Apapa, described the gesture as timely.

He stressed that the US had always been of immense assistance to Nigeria adding that the three day training could not have come at a better time. He assured that “the national maritime environment would now be better secured after the training and delivery of the expected vessels”.

Continuing, the naval boss said, “you know how much we have gone through in providing security for the gulf of guinea particularly in our own area and you know the resources of the gulf of guinea attracts a lot of international concern. More so, personnel of most countries especially those of our white brothers you know have at various instance been abducted in Niger Delta; these equipment are to enhance our capacity to cope with the demanded security and protection of these activities in our waters.”