Somali pirates: Not welcome at home? 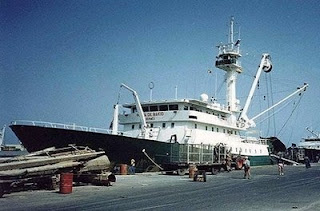 Reports of the pirates who are holding a Spanish trawler being forced to move by local pressure, as set out here:

Pirates holding hostages on a Spanish trawler off the coast of Somalia are sailing deeper into the Indian Ocean after local residents threatened them, local witnesses said Thursday.

The pirates took supplies from the port town of Haradere and sailed off headed for the deep ocean about 100 miles from the coastal area of Gaan, said an elder who asked not to be named.

"Maybe they got rumors that Islamic fighters in the region were preparing to attack," the elder added.

"We did not see the boat when we went for fishing today, I think they (pirates) moved to another place after getting threats from locals," Abduqadir Ahmed, a local fisherman, told AFP by phone from Haradere.

He added that the pirates took supplies -- food and medecine -- on Wednesday night, an indication that they were planning to move.

They can run, but no one expects the Spanish ... armada.