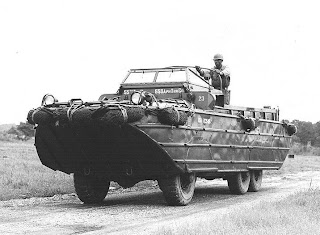 It's WWII. You load a ship with all kinds of goods needed by troops to fight a war and you send that ship off to some remote location where there are no piers, no roads, no ports in the conventional sense. How, you ask, can we sustain our men in the field if we can't get their supplies to them? 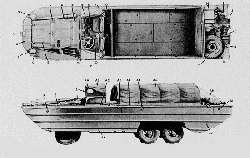 Or, as the question is posed by the U.S. Army Transportation Museum here:

In early 1942, ships sat waiting to discharge cargo at foreign ports, sometimes for months, due to lack of port facilities. Ships waited for barges, barges waited for trucks, and trucks waited for trains.

Smaller landing craft were being built by the hundreds as quickly as possible to accomplish this mission. Planners soon found the need to deliver high priority cargo, such as ammunition and water, directly to troops fighting inland off the invasion beaches.

The US Navy, responsible for the operation of all boats and ships, simply did not have enough men to train and operate all the various landing craft rolling off assembly lines.

In early 1942, the Navy requested that the Army train and man some landing craft and all of the DUKWs. Initially, this mission was assigned to the Corps of Engineers. The First Engineer Amphibian Command was established early in the summer of 1942.

After training, groups of these engineers and their odd vehicles were sent to the war zones, where the DUKWs proved very valuable. In the words of Samuel Eliot Morison in The Two-Ocean War (p. 249), these amphibious trucks solved several problems, as in the invasion of Sicily: 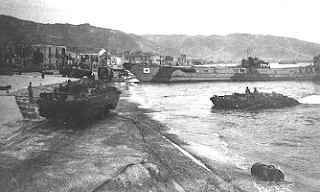 According to Thucydides, the Greeks who invaded Syracuse in 413 B.C. had most to fear from the Sicilian cavalry, against which for want of a Landing Ship Horse, their only defense was archery. Enemy tanks, the modern cavalry, are now the bane of amphibious landings. In order prevent their working havoc on the GIs it was necessary to land our own tanks and antitank guns with or immediately after the assault troops. That was the main function of the LST and LCT. These craft were supposed to be able to ground on a beach and lower their ramps, over which tanks, guns and vehicles could roll ashore. The LCI beached and then lowered bow gangways, not unlike he "brows" of a Greek bireme, for infantry to land without boating or swimming. Unfortunately, most of the Sicilian beaches were protected by sand bars with enough water to float a landing craft but not an LST. The dukw, an amphibious truck which could carry 25 troops or 2-12 tons of cargo, swim in the water and roll over the land and required only one driver, also made it European debut in HUSKY (NB E1: "HUSKY" was the code word for the invasion of Sicily). The great advantage of the dukw was its ability to carry supplies from a ships to an inland dump without handling at the water's edge.

DUKWs earned their stripes in the Pacific, too, landing at Kwajalein and on other islands, always proving their worth. In the Philippines, DUKWs were invaluable.

Not that they didn't have some occasional problems, as Morison notes in describing the Normandy landings on D-Day, June 6, 1944 (p.402-403): 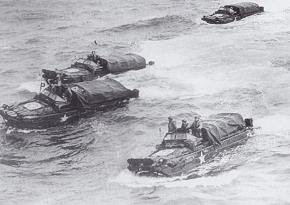 Once the assault started, landing and beaching craft crews were completely on their own...For two hours after the beachmaster suspended landings, about 50 LCTs and LCIs milled about looking for gaps in the obstacles. Two young skippers then broke the stalemate. Lieutenant 9jg) S. W. Brinker USNR crashed LCT-30 through and beached, her automatic weapons blazing at an enemy strongpoint, which shot her so that she had to be abandoned; but her vehicles got ashore. Lieutenant E. B. Koehler USNR followed with LCI-554 but managed to retract after landing his passengers; and after this example the shoreward movement was never interrupted.

Most of the artillery scheduled to land between 0800 and 0900 was boated in dukws, which were unable to cope with the choppy sea. Only five made it to the beach; hence only one Army battery managed to get into action on D-day. But the place of the drowned artillery was proudly taken by the 5-inch guns of the support destroyers. At 0950 Admiral Bryant called to all gunfire support ships over the TBS: "Get on them, Men! Get on them! They are raising hell with the men on the beach and we can;t have any more of that. We must stop it!" Magnificently they complied..."Without that gunfire," wrote the chief of staff of the 1st Division to Admiral Hall, "we positively could not have crossed the beaches."

No fault of the DUKWs, they were not designed to operate under such conditions. More on the D-day DUKWs here, which contains this great story:

One DUKW set off a mine at sea, and survived. The Admiral sent a signal to the commanding officer; I am aware of the many and varied duties which your DUKWs so efficiently perform, but until this morning I did not realise that minesweeping was one of them. If the crew of the DUKW report at Navy House they will receive the customary award the Admiralty makes to anyone who sweeps a mine. This turned out to be a bottle of scotch. The inevitable result was that DUKWs tended to meander in search of mines!'

That site also posts the following photo of King George VI disembarking from "The Royal DUKW." 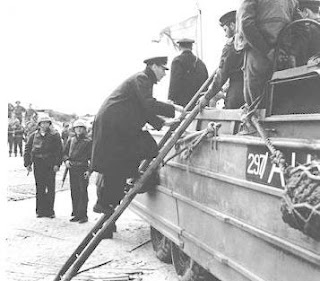 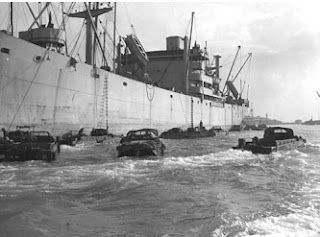 Perhaps proof of their value is best represented by their numbers:

By the end of World War II, a total of 21, 147 DUKWs had been built. The Army had organized 70 Amphibious Truck Companies and assigned over 12,829 soldiers to operate and maintain them.

Army DUKWs saw action in Korea, too, landing at Inchon and Pusan.

Of course, there were the occasional odd DUKWs like this "Dukws Radio Beach Landing Vehicle" found here, but without further detail. One assumes it was an amphibious radio truck used for command purposes.

The Marine Corps also had DUKW companies, as set out here. The Marines, too, enjoyed the benefits of these swimming trucks:

During a five-day period of stormy weather, which caused LCVPs to broach on the beaches and Amtracs to swamp or capsize in huge surf and become uncontrollable in heavy seas, DUKWs were the only means able to bring supplies ashore, enabling Tinian units to continue fighting.

The hybrids carved their niche in Marine Corps annals in the Marianas, including Guam. By mistake, Second DUKW landed 14th Marine howitzers on Saipan earlier than scheduled, reputedly in the third wave. Having artillery support ashore during the invasion's early stages proved of such benefit that the Marine Corps thereafter scheduled artillery to land earlier than previously thought practical.

The DUKW's ability to board and debark without assistance via way of an LST's ramp enabled the ship to anchor offshore, thereby reducing reef and beach congestion and lessened the danger of enemy fire on ship and personnel. Furthermore, the hybrid's ability to cross coral reefs and sandy beaches and then proceed inland to wherever supplies were needed saved what would otherwise have been countless man-hours of handling supplies. The DUKW's versatility forestalled the necessity to bring heavy transport vehicles ashore during early stages of invasions, further reducing island and beach congestion.

DUKW crews learned to think of their marvelous vehicles as lifesavers*. In addition to providing forward units the means with which to fight, each trip for a load of battle goods entailed quick delivery of Marine casualties to offshore ships for better medical care.

Iwo Jima was another test for the DUKW. As in the Marianas, it proved its mettle by moving artillery and supplies ashore, where it turned out to be the only wheeled vehicle that could move freely on Iwo's treacherous surface. Here too, Marine DUKW'ers carried a halo over their heads because, just as in the Marianas, losses were miraculously light. Landing on Iwo Jima under fire the first day of battle and operating on the island until it was secured, Capt. Walter Alford's 4th DUKW had not a single man killed but a number wounded though his company lost 16 DUKWs.

The DUKW further proved its value with Marine forces at Okinawa. Heavy rains made the island a quagmire at times. Loading in rear areas, the hybrids then proceeded by sea to deliver needs to frontline units. Crews not only braved enemy shells and sea delivering means of war to forward units, DUKWs from Second DUKW evacuated a unit trapped behind enemy lines. The company's personnel may have been the first Marine ground force unit to wear armored vests in combat--Army Air Corps flak jackets on Okinawa.

Today, DUKWs survive, offering tourists rides in a surprising number of locales, for example, Baltimore's Ride the Ducks. Ride the Ducks deserves recognition for another reason: 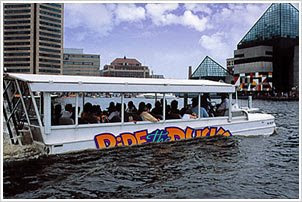 Our vehicles are not only the best and most proven design for amphibious sightseeing, but they have also proved worthy in rescue missions. Ride The Ducks was the only amphibious tour operator/manufacturer to support the rescue and evacuation efforts in New Orleans after Hurricane Katrina. We immediately volunteered equipment, crew, and other resources in order to help evacuate hundreds of residents of the hardest-hit areas. Our team of volunteers was deemed "invaluable" by many involved in the rescue effort as our ducks were able to safely access and remove large numbers of people from areas inaccessible by other means. Not since Normandy have we been so proud of our Ducks-and our people. 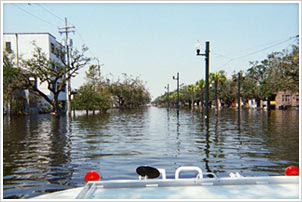 Which proves that you can teach old DUKWs new tricks.