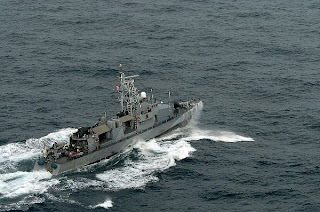 It was not, apparently, as some sources have it, warning shots (see here), but rather a "warning flare" - reported here

A Navy patrol ship in the Persian Gulf fired a flare to warn off three approaching high-speed boats late Thursday, the Navy said, and although a Navy spokesman said the boats were unidentified, U.S. news agencies reported they were Iranian.

The coastal patrol ship Typhoon was in the central Persian Gulf on its way north when it encountered the three boats, said Lt. Nathan Christensen, a spokesman for 5th Fleet in Bahrain. The Typhoon’s crew made what Christensen called “standard queries” over the bridge-to-bridge marine radio, warned the ships to stay away, and then fired the flare. As the Typhoon continued its transit, the three boats fell behind out of sight, he said.