Spain may take a whack at the Somalia pirates holding one of their tuna boats, it's reported here

Spain could stage a military operation as a last resort to rescue 26 fishermen whose boat was seized by Somali pirates in the Indian Ocean, press reports said Tuesday in Madrid.

The Spanish frigate Mendez Nunez was on its way from the Red Sea towards the Horn of Africa, but government sources said its presence would be "dissuasive" and no military action was planned.

The daily El Pais, however, said the government was considering a rescue operation if it could not resolve the situation through other means, such as paying the ransom demanded by the pirates.

The tuna fishing vessel Playa de Bakio was seized Sunday in international waters where it was attacked with grenade launchers by four pirates. The pirates are asking for a ransom for the 13 Spanish and 13 African fishermen.

The vessel was being taken towards Somalia. Spain was waiting for the pirates to specify how much money they wanted.

The Mendez Nunez carries marine infantry soldiers, including elite snipers, but a military operation would require the dispatch of a special operations group from Spain, according to El Pais.

Spain has also contacted a NATO task force present in the area, in case it could provide any useful information.

Piracy situations off Somalia have not been resolved through rescue operations so far, according to Spanish reports.

Spain has reportedly established a crisis response team and is weighing options. Meanwhile, a NATO alert has been sounded, as set out after voice communications with the crew and pirates 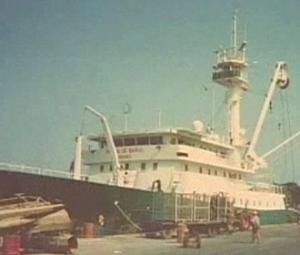 He was interrupted by a man who identified himself as a member of a "Somalia militia" and said in broken English that there would be no problems if their demands were met. Details of the pirates' demands have not been made public but the Somali was heard to say: "It's a question of money."
***
"The ministry of defence has alerted Nato and contacted France, Britain, and other allied countries with a military presence in the area," said Jose Luis Rodriguez Zapatero, the prime minister. The government said it was working with the African Union and Somali authorities to resolve the situation.