One of the most powerful tools in the hand of the state is the power of life or death for its population. North Korea is wielding that tool again as it seeks to blackmail the world into both feeding the North Korean people and caving into North Korean nuclear ambitions. As set out in North Korean food shortages make combustible situation worse , the failed leadership of the totalitarian state always resorts to threats to get what it wants, threats that allow the failures of leadership to be blamed on the outside world:

The warnings followed a report Thursday that the totalitarian regime has suspended food rations for six months in Pyongyang, home to the country's most well-off and loyal citizens, in an apparent move to save food as the hard-line regime braced for a prolonged standoff with Washington and Seoul over the North's nuclear program.

Although the state ration system has not functioned well in recent years, the suspension of rations will force Pyongyang citizens to buy food with their own money or use any private stockpiles.
***
Experts said a combination of factors makes this year especially harsh for North Koreans, whose isolationist government asked for outside aid in the 1990s only after a famine killed more than one million people, of an estimated population of 23 million.

Floods reduced the North's autumn harvest last year by 11 to 13 percent, according to international relief officials. Higher global food prices have undercut Pyongyang's ability to import grain. China, the biggest exporter to North Korea, has been desperate to keep its own runaway food prices under control, imposing high tariffs on any food going out. And amid the rising political tensions, South Korea has not shipped its annual food assistance to the North this year.

"All of these different events are likely to have an effect on the overall food security situation in North Korea," Risley said. "This will of course present challenges for our own specific program, which is now feeding over one million people in North Korea."
***
"It appears that North Korea is negotiating with the outside world holding its own people hostage," said Dong Yong Seung, a North Korea expert at Samsung Economic Research Institute, in a commentary circulated by the Seoul relief agency Peace Foundation. "It holds on until the very end before asking for international help. It's the people who suffer the most."

Isn't it always so in such states?

UPDATE: Bags of rice once headed to the DPRK: 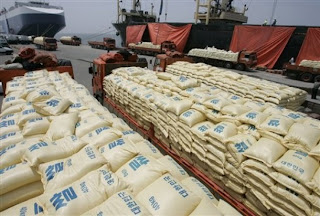 Photo from here with this caption:

9 months ago: Bags of rice bound for North Korea sit on trucks before being loaded on to a Vietnamese ship at Gunsan port in Gunsan, south of Seoul, South Korea, Friday, June 29, 2007. South Korea said Tuesday it will start sending promised rice aid to North Korea this weekend after the North moved to follow through on its nuclear disarmament pledges. The first shipment of 3,000 tons of rice will depart Gunsan port for North Korea's Nampo port on Saturday. The Korean reads " Rice and Republic of Korea."

Email ThisBlogThis!Share to TwitterShare to FacebookShare to Pinterest
Labels: DPRK