Canada gets tough with anti-sealing"pirates" 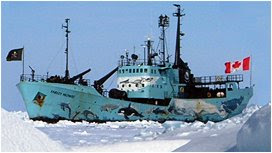 Canada apparently has had enough of the self-righteous Sea Shepherds and their self-proclaimed "lawless" ways, a demonstrated here:

An anti-sealing group says seized ship logs and GPS tracking records can prove that Canadian officials ventured into international waters when they boarded the group's vessel and arrested crew members in a dramatic police offensive on the weekend.

The Saturday boarding of the Farley Mowat provoked a storm of accusations between Fisheries Minister Loyola Hearn and the activists over whether Canada was within its rights to intercept them.
***
Paul Watson, head of the Sea Shepherd Conservation Society, said Canadian authorities entered international waters to seize the Farley Mowat, which is registered in the Netherlands. He called the boarding by armed RCMP officers in the Cabot Strait both an act of piracy and an act of war.

"We're a Dutch-registered vessel in international waters with a Dutch captain, Swedish first officer and European crew, and we were boarded by Canada. That's an act of war."

He said the ship's logs and GPS records - seized along with the vessel by Canadian authorities - prove the ship never strayed into Canada's 12-nautical-mile territorial limit.

"We have it actually recorded on our GPS, which of course is in the hands of the government," Mr. Watson said in an interview. "But they'll have to produce it. The evidence is there. They can't destroy evidence."

But Mr. Hearn reiterated the Department of Fisheries and Oceans' position that the vessel was seized in national waters, after requests for it to report to a Canadian port were ignored.

"We're sick and tired of simply waving at these people as they come do what they want, break our laws, leave our water," Mr. Hearn told CTV's Question Period yesterday. "From now on, if they want to play that game, we'll play ours."

Given the high tempers and the Farley Mowat's refusal to follow regulations, Mr. Hearn said he was concerned lives were in danger. "If someone had gotten shot, if someone had gotten killed, who'd be to blame? I would - 'Why didn't you act?' So I acted."
***
The charges relate to a March 30 incident in which the vessel Farley Mowat allegedly went within six metres of several sealing vessels that reportedly had at least one man on the ice floes nearby.

The Farley Mowat had already drawn the attention of Canadian authorities by that point. It had not applied for an observer license, which would have allowed it to go within 10 metres of the seal hunt, and upon arriving at Canadian waters had refused to communicate with Transport Canada, according to the DFO.

On April 5, the vessel's captain and first officer were charged over the March 30 incident - a charge that carries a fine of $100,000 and up to one year in jail. Over the next several days, according to the DFO, the Farley Mowat passed back and forth into Canadian waters, and refused to respond when it was ordered into port. Mr. Hearn is on record warning Mr. Watson that the boat would be boarded at sea if he did not comply. ***
Mr. Watson said the ship did not heed Canada's warnings because "we don't take orders from Canada." He followed Dutch rules, he said.
***
Ottawa says the interception occurred in the Gulf of St. Lawrence in Canadian waters.

Professor William Tetley, a professor of maritime law at McGill University in Montreal, said he believes Canada was within its legal rights to board the vessel in the Gulf of St. Lawrence or the Cabot Strait.

"These are Canadian waters," he said. "They [the Farley Mowat] would have the right of free and innocent passage through there, but if they committed a crime two weeks before, they're still subject to arrest."

I'll bet the Dutch are just raring to go to war with Canada over this matter. Sea Shepherd's Watson selective application of the law is just one of the things that makes his ships a special collection of jerks.

Canada's fisheries minister defended the arrest of an anti-seal-hunt vessel Saturday, and dismissed the crew members as "money-sucking manipulators."
***
Watson said the raid would backfire on Canada.

"By arresting us -- a European-registered vessel, a European crew -- in this way, that pretty much ensures the bill banning seal products in Europe will be passed," he told media.

"They did exactly what we thought they might do, but I didn't think would be stupid enough to do."

The minister had little time for the protesters.

"They are a bunch of money-sucking manipulators," said Hearn, "and their sole aim is to try to suck as much money out of the pockets of people who really don't know what's going on."

Saturday's raid stemmed from a high-seas confrontation between the Farley Mowat and sealers near Cape Breton on March 30. Sealer Shane Briand said the Mowat endangered the lives of his crew when it came close to them about 60 kilometres off Cape Breton.

That resulted in the charges laid against the vessel's captain, Alexander Cornelissen, and first officer, Peter Hammarstedt.

More fun reading here. Sea Shepherd press release here. Photo their ship Farley Mowat from their site. You might note the pirate flag on the bow.

UPDATE: Other seal attackers that the "Sea Shepherds" will not take on:


UPDATE2: More name-calling, this time from the premier of Newfoundland and Labrador:

But Williams said Watson — who earlier this month described sealers as "sadistic baby-killers" — deserves no sympathy.

"Ever since I've been aware of him, I've always considered Paul Watson to be, you know, a vile, disgusting excuse for a human being," Williams told CBC News Sunday, as Watson was arriving in Nova Scotia to help bail out the skipper and first officer of the ship.

"I think what a lot of people don't realize is that this man is a terrorist, in fact, you know, to come out with the insensitive remarks, for example, that he came out with a few weeks ago, when these sealers lost their lives and he put their lives below animal lives," Williams said.

Watson sparked an uproar earlier this month when he said that while the death of four Quebec sealers was a tragedy, "the slaughter of hundreds of thousands of seal pups is an even greater tragedy."