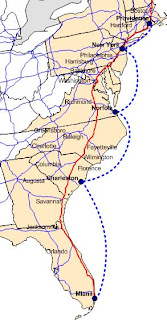 The Baltimore Sun suggests a way around highway shipping woes - by using ships in "Put ship in shipping":

When it comes to transportation planning, we need a detour from the usual remedy of building highways - a detour that removes traffic from the roads altogether and onto one of our most under-utilized transportation resources: the sea.

The incidents in Minneapolis and Philadelphia illustrate the fragility of our nation's interstate highway system and its vulnerability to disruption by terrorist attack, natural disaster or collapse from overuse and lack of maintenance. The American Society of Civil Engineers (ASCE) rates over 25 percent of our country's 599,893 bridges as either structurally deficient or functionally obsolete.

This situation threatens the daily commute of millions of Americans and the constant flow of goods upon which our just-in-time economy depends. And growing traffic volumes will add further strain on our interstate highway system. According to forecasts, U.S. freight tonnage will increase by 70 percent between 1998 and 2020, with trucks handling most of the increase.

Expanding the highway system to accommodate more traffic is expensive. The ASCE estimates that improving the nation's surface transportation infrastructure would require $155.5 billion annually. Contrast this with the Federal Highway Administration's budget of $40.1 billion for fiscal year 2009. We simply have not allocated sufficient resources to pave our way out of this challenge.

Fortunately, America has another, now virtually unused medium of transport. For interstate highways paralleling our shores, coastal shipping offers us a splendid alternative and a great entrepreneurial opportunity.

Marine highways do not need periodic resurfacing or massive land acquisition for expansion. They only require relatively small investments at each port terminal. Increased coastal shipping would also provide a new resilience to our transportation network, thereby contributing to national security.

Moreover, an alternative transport mode for heavy trucks would slow the aging process of the interstate highway system. According to a Federal Highway Administration study, trucks were responsible for 40 percent of the agency's program costs while accounting for less than 10 percent of total vehicle miles traveled. We must extend the useful life of our interstate highways as long as possible.

We might begin simply by putting trucks on ships. The shipping industry already builds vessels for that purpose, and the shore facilities for such ships are relatively simple and cheap. Trucking companies, struggling with the shortage of drivers, should welcome the opportunity to move long-haul trailers from one port to another. And they too would be pleased with less congestion on the coastal interstates.

The new marine medium would be a source of new jobs, both at sea and on shore. Furthermore, studies have shown that ships have the potential to carry three times more cargo per unit of energy consumed than trucks do. Thus they can cut transport costs and lower prices across the market, with benefit to both producer and consumer.

And, it gets better: New "green" propulsion systems, such as marine engines fueled by compressed natural gas, offer even lower emissions and better air quality. No more choking on diesel fumes; everyone benefits.

I don't see anything about the costs of developing our ports to handle more traffic, the need for more ships, crews and other maritime infrastructure and the need for drivers to get the trucks on and off the ships to their destinations. And I could quibble about how many of the 150,000 deteriorating bridges are on the heavily traveled East Coast corridor, but I won't.

It is an idea, however, when its true costs are developed and recognized, should be looked into.

In fact, it already has been. The topic of the Sun piece is known as "Short Sea Shipping" - which the United States Maritime Administration (MARAD) says is:

For those interested in reducing the East Coast land transport woes along Interstate 95, which is the main north-south traffic artery, MARAD has a pdf available from the "I-95 Corridor Coalition" titled "Short-Sea and Coastal Shipping Options Study" here. Dated 2005, it contains some useful information that would support many of the goals set out in the Sun piece, but also a few concerns:

Existing infrastructure may not be capable of handling large volumes of short-sea
traffic. There are two infrastructure issues that interviewees mentioned. The first is the condition of the U.S. inland and coastal waterway systems, which have not been
maintained effectively over the last several years. In many cases, the waterway infrastructure (locks/dams, channels, bridge clearances) is not robust enough to handle commercial traffic. This results in somewhat of a “Catch-22” situation: it is unlikely that major investments to maintain or improve the coastal/inland waterway infrastructure will be made until there is sufficient commercial traffic; and commercial users are not likely to consider short-sea/coastal shipping as a viable option until the system is improved (and can provide some degree of transit time reliability). The other infrastructure issue is the condition of existing port and terminal infrastructure. Many of the under-utilized ports that would benefit from increased short-sea shipping operations do not have sufficient infrastructure (berths, cranes, access) to support efficient short-sea shipping; the ports that do have that kind of infrastructure are typically larger, load center ports that already are nearing capacity and that often give preference to larger, oceangoing, international container ships.
***
There is a shortage of vessels suitable for use in short-sea trade. Due in part to the requirements of the Jones Act, many interviewees indicated that there is a lack of vessels that are appropriate for use in short-sea operations. Many interviewees stated that high-speed vessels (capable of attaining speeds of 25 to 30 knots) are necessary to support short-sea shipping operations. These vessels are expensive to construct and maintain, requiring a long-term commitment by shippers who would use a short-sea service. This results in another “Catch-22” situation: shippers often do not want to commit to the service until a vessel is constructed that can support it and operators often do not want to invest in new ships unless they have long-term commitments from shippers.

Many companies are already in the inland container barge business, as set out here in a press release from 205:

Osprey Line, LLC, ("Osprey Line") announced today that it recently completed the largest single unit tow container movement in the history of the U.S. Inland Waterway System. The 15 barge tow was loaded with 375 containers (750 t.e.u.¹s) of agricultural products from Memphis to New Orleans and Houston. Osprey Line worked closely with six major steamship lines to move the cargo to Gulf of Mexico ports for export on container vessels. The volume transported is the equivalent of some ocean going vessels in the container trade, and several times larger than the majority of vessels employed in the short sea shipping trade in Europe.

"This voyage is an illustration of what we are accomplishing here at Osprey Line. The service is a great alternative to truck and rail on routes along the inland waterway system and the Gulf of Mexico. The U.S. Inland waterway system is an amazing resource that can readily be used to alleviate congestion along existing rail and highway corridors. When you combine Osprey Line¹s inland service with our Gulf of Mexico service, we provide an all-water system extending from the heartland of the United States to ports such as New Orleans, Baton Rouge, Houston, and Tampa. With partners like Kirby Corporation and Cooper T. Smith, we have the resources to respond to projects such as this container move and provide consistent reliable service."

MARAD site devoted to encouraging use of inland waterways for "intermodal" transport here.

Moving containers by barge is seen as an alternative to the growing congestion being experienced by landside modes and a freight capacity shortage. It is also cited for it environmental advantages and the potential cost savings for shippers. C-O-B could fill a niche market in the transport of containers that are not time-sensitive, containers that exceed highway weight limits, and repositioning/prepositioning of empty containers.

There are a lot of potential upsides. However, as the UNO study stated in 2004:

Extensive recent studies conducted by the maritime industry and research institutions find that the Short Sea operations, based on deployment of Ferries to carry domestic trailers and international containers, should provide a significant impact on the formation of an effective intermodal system. Such a system would relieve congestion and decrease the number of heavy trucks on coastal highways. It also improves safety, air, noise, and other environmental consequences of land based transportation modes, creates a modern U.S. fleet reserve and cadres of seafarers for military and other emergencies.

Implementation in the United States of these promising maritime services, however, faces a number of financial, regulatory, and marketing problems. Unless these problems are resolved, a viable maritime system would have serious difficulties in being effective. Viability of the Short Sea services, to a large extent, is beyond only direct financial savings, but also includes a variety of external benefits in comparison with other modes of transportation. The issue here is that in the planning and actual implementation of the system the industry, as of today, does not receive any credit for generated external benefits.