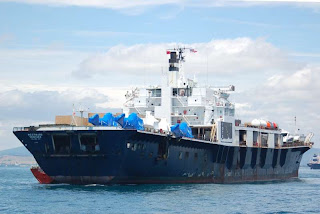 The crew of the Westward Venture, which was under contract to the U.S. government, reported that it radioed a warning and fired flares before resorting to warning shots Thursday, the officials said.

The ship carried a Navy mobile security team that is authorized to respond to perceived threats, as do all military-contracted ships in the 5th Fleet's area of command in the waters surrounding the turbulent Middle East and East Africa, the Navy said.

The cargo vessel was en route to Kuwait and about 50 miles from the Iranian coast, according the reports.

The Revolutionary Guard, part of Iran's military, says no such incident took place, according to the state-run Islamic Republic News Agency.

Ok, no such incident took place. Really. We believe you. Really.